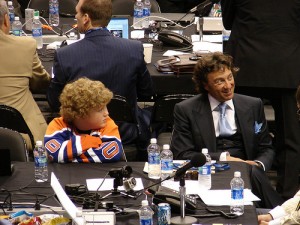 I can go down 2 different roads while writing this.  I can take the “we’ve hit rock bottom, but it has nowhere to go but up from here!” road.  But there is one big issue with that.  It’s a total lie.

I’m taking the honest road.  It’s not popular.  It sounds really pessimistic.  But it’s what everyone needs to hear, be reminded of, and know.

By the way, this piece is on the Oilers…Might be an odd time to write this with the Oilers coming off their best stretch of the season having got 6 of 8 points in their last 4, and the game prior to that they came back from 4-0 down in Pittsburgh against the Penguins when they had zero reason to fight back.  But I just think it’s the right time to remember the issues that still plague this franchise.

I guess the best place to start is with the coaching situation.  Everyone is pumped about Todd Nelson, and he’s done a damn good job.  Outside of Mike Babcock being willing to come here (which I doubt he would), I would remove the interim tag off Nelson.  But it’s not going to make much of a difference.  It is still the same people who got the Oilers into this mess being asked to get them out of it because the owner is more concerned with having his buddies employed than having a winning hockey team.

The draft isn’t going to save them.  MAYBE they win the lottery, in a year where it truly is a lottery, and they’ll get the franchise saviour in Connor McDavid.  But even if they won the lottery, it will be at least another year out of the playoffs.  Look at the Pens when they won the Crosby lottery.  If anyone recalls, the Pens were then able to land a ton of high end UFA’s in the 2005 offseason.  Ziggy Palffy, Mark Recchi, Sergei Gonchar, John LeClair, etc.  The result?  Another 29th place finish.

Everyone forgets that the Pens didn’t turn things around until the old guard was finally shown the door.  Craig Patrick was the architect of the 91 and 92 Cup champions.  But Craig Patrick lived off those fumes for a long time.  Horrible coaching hires, failing to address vital area’s of need like the D corps, goaltending, and depth down the middle, Patrick needed to go.

The pick is Noah Hanifin despite what anyone else tries to tell you.  The people in charge make horrible decisions, but they aren’t so stupid to pass on a D-man with elite potential.  Add Hanifin to Nurse, Klefbom, and Schultz (yes, Schultz is still only 25 and has like many others shown a lot of improvement under Todd Nelson) and the Oilers blueline moving forward is looking really impressive.

I do realize that Corey Pronman of ESPN wrote that he believes the Oilers want Mitch Marner, but I find it hard to believe anyone from ESPN having strong inside knowledge on the Oilers.  I do normally agree with the notion of forward over D when it comes to top 5 picks, but there are always exceptions to the rule and the Oilers are that exception.  Also, D-men carry much higher value than wingers, so Marner over Hanifin would be pretty ridiculous for the Oilers in my opinion.

The problem with Hanifin joining that group is they’re still looking at 3 MORE years until that group is capable of getting a team to the playoffs.  As for the rest of their picks that they should move for other teams cap casualties, even if they hit home runs with those picks, it’ll be 3-5 years before those picks start making an impact.  Look at the 19th pick in the 2011 draft.  I BADLY wanted Oscar Klefbom at 19, and jumped around my buddies basement when he was the pick.  And just now he is starting to make an impact, and still not ready for a top 4 role on a playoff team.

But hey, maybe the make a blockbuster trade!

Let’s look and see…nope, they won’t.  What leads you to believe otherwise?  Pierre McGuire said it on trade deadline day that these guys don’t understand other players value around the league.  So let’s say they end up with the 4th pick and there really isn’t a player in sight that they really NEED.  Move it for a player.  Hell, package it for a player.  The 4th pick in a great draft should net a big return right?  They won’t do it.  They’ll overvalue the pick.

What they MIGHT do is package up the Pens pick (22nd as of writing this), along with what would be the 33rd pick and probably a guy like Marty Marincin.  So what does that get you?  Normally I know what players value is, but with the cap not going up and such a higher value being placed on picks these days I just really don’t know.

There are a few guys who might be made available this summer.  Big names.  Brent Seabrook who only has a year left on his deal.  Same with Milan Lucic and David Backes.  Here is the problem though: they all have NTC’s and none of them are going to waive them to come to Edmonton.

Want more salt in that wound Oiler fans?  If Seabrook is dealt, I would put pretty good money on Calgary going HARD after him, and that’s a tough situation to turn down right now.  Brian Burke values a great blueline above all else.  It’s what he won with while GM in Anaheim.  And even though he isn’t the GM in Calgary, he is the guy in charge.

So while the Oilers have the assets to land 2 of these 3 guys, they won’t land any of them.  Even if one or two of them would waive to go to Edmonton, I doubt this management group would have the balls to get deals like that done.

So what CAN be done?  What is something that this organization can do to get things finally turned around?

There is 1 guy who MIGHT be willing to come, and that is Dion Phaneuf.  But again, Phaneuf has a NTC.  The Leafs don’t have to deal Phaneuf though, so if the Oilers were to put forth a great offer then it could become a waiting game.

I know some of you are saying right now “Phaneuf sucks I hate that guy!”  But the fact of the matter is that he doesn’t suck.  He’s a top pairing D-man in this league.  Is he a number 1?  In the right situation he would be, I really believe that (St. Louis, L.A., etc).  This isn’t the right situation, but man does he ever bring a lot to the table that they need.  Minute eater, big shot on the PP, toughness, experience, and he’s in his prime.  Dion Phaneuf isn’t worth his contract to most teams, but he is worth what he is getting to the Oilers.

Another one that is very simple?  Clean house in the front office.  Lowe, MacTavish, Howson all finally shown the door.  But the desire to do that is cooling off from fans and media because the team has looked slightly below average since the Derek Roy trade.  And we all know this won’t happen again because the owner is one of the worst in all of sports.

I don’t know what Oiler fans did to deserve this hell.  And yes, from a sports POV it is a hell.  Since June 17th, 2006 this fan base has been tortured.  Losing game 7 in Carolina, the mass exodus that followed led by an in his prime Chris Pronger, winning the final game of a miserable 2007 season that moved them past the Blackhawks into 25th overall allowing Chicago to win the draft lottery and select Patrick Kane, an absurd amount of injuries to key players from 2007-2011, having the top pick in years where there weren’t franchise changing talents available, and on top of all that, horrible management and ownership that have no clue how to run an NHL franchise.

You know I’ve heard from a lot of people how they don’t want to see the Oilers get Connor McDavid.  I don’t expect anyone to have sympathy for them, but how in the heck does a fan base who have been repeatedly punted in the balls for the last decade not deserve a player who can drag them out of the gutter??

Same goes for Leafs fans.  Obviously for myself I am hoping the Oilers get lucky and win the top pick, but if the Oilers don’t win it then I hope the Leafs do.  No fan bases deserve the misery that these two are going through.  I’m not saying that they’re deserving of a Cup (although if anyone does it’s the Leafs), but AT LEAST some playoff appearances.

There are positives here, no doubt.  Nail Yakupov is playing like a potential superstar again, Jordan Eberle is back to his former self, Oscar Klefbom looks to have all the tools to become a top pairing D-man, Anton Lander has gone from bust to what most expected him to become, and a team that was completely broken at Christmas time has turned into a pretty hard working group.  But they’re playing much harder, getting much better goaltending, have the best PP in the league since the All-Star break, and they STILL aren’t very good.

It sucks, I know.  For me, I’ve become apathetic to it all as I’ve said in these blogs many times before.  But it’s not like I don’t remember what’s it is like to have a competitive team.  If life is going shitty, at least you can hope for you team to pick you up with a win.  Oiler fans haven’t had that pick me up for 6 years, and haven’t seen playoff hockey in 9.

Worse than all that is I highly doubt any of this is going to change in the next few years, while the number 1 rivals down highway 2 are not only poised to go to the playoffs, but add 2 or 3 big names this offseason while the Oilers, barring a minor miracle, continue to spin their wheels.