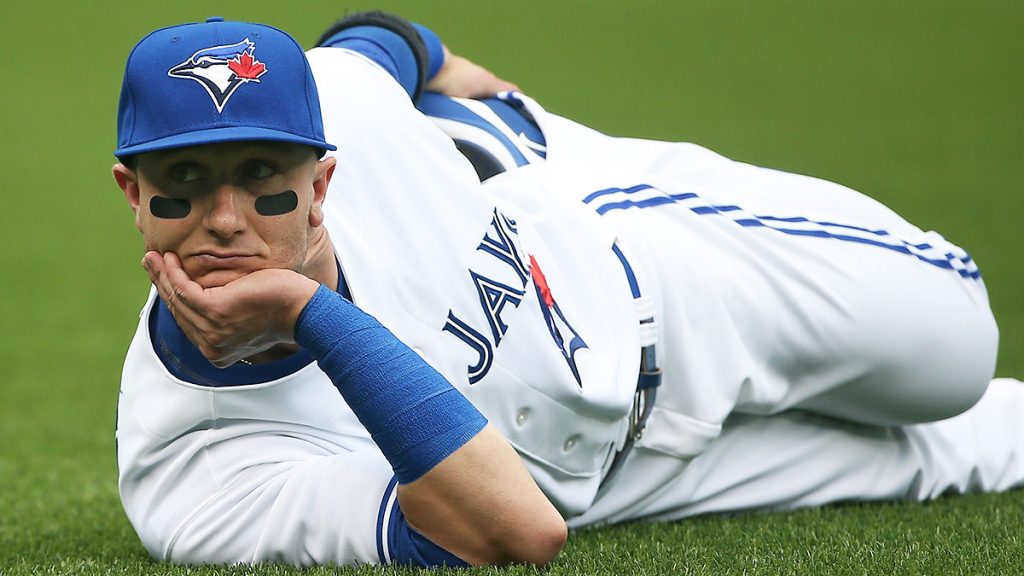 Remember the offseason?  Remember when we were all in panic mode because David Price was gone?  Remember how gross we all thought the J.A. Happ contract was?  Remember how most of us were so pumped that the Jays nearly acquired Jay Bruce and all they were going to have to give up was Michael Saunders who was useless?  Damn, we are smart.

Around this time of year I tend to write my first Jays piece of the season.  I don’t THINK it’s because the NHL and NBA have essentially shut it down (though Dwayne Wade leaving Miami definitely doesn’t keep things quiet in the NBA!) but I tend to always write my first piece this time of year.  In 2013 it was about how I wasn’t a believer in the team despite an 11 game win streak (this club loves their 11 game win streaks don’t they).  In 2014 it was about how this time around I actually was a believer as they rattled off 9 in a row (at the time), 13 of 15, and 18 of 23.  Of course, that was really wrong as they pretty much died a slow death from that point on in the season.  Then finally last year I didn’t write about their 11 game winning streak.  I didn’t want to jinx it like I figured I had the two previous seasons.

This time around, I’m nowhere near worried about being a jinx, this team is a serious contender.

Obviously last fall is a big contributor to this line of thinking, but you still didn’t know for sure entering the season whether or not the Jays swagger would carry over to this season.  Perhaps without that legit ace on the pitching staff they would have their doubts?  But they haven’t skipped a beat.  And yes, they’ve had their up’s and down’s this season, but the body language has never changed.  This team knows they’re among the best and baseball, and if things aren’t going well, they snap out of it.

The most encouraging sign to me relates to what they just did.  They swept the Royals.  Over the weekend, they split with the Indians although Friday’s game was pretty literally won just as much by umpire Vic Carapazza as it was by the Tribe.  Point is, they’ve really risen to the occasion against the top teams this season.  Since the start of May, they’re 20-13 vs the Red Sox, Orioles, Rangers, Dodgers, Giants, Indians and Royals.  Pretty solid.  In the past, that’s where this team folded.  They’d always beat up on the weak and shrink against the top teams.

Another great sign is that they’re getting by more so with pitching than hitting, at least for the majority of the first half.  Aaron Sanchez, lights out (more on him coming up).  Marco Estrada, an ace and frankly I’m shocked that last season has carried over.  J.A. Happ, a tremendous signing by Mark Shapiro (I believe he was signed prior to Ross Atkins being named GM in case you’re wondering).  R.A. Dickey, having his typical season where he starts awful and by June is giving you far more good outings than bad.  Finally, Marcus Stroman.  Is the slump now over?  Last night he was sensational.  It’s only one start, but he definitely looks to be back on track.  There were signs in his previous outing that he was coming out of it, and those good signs carried over.  I wouldn’t declare him to be out of the woods just yet, but chances are good that the worst of his 2016 is over.

As for the Aaron Sanchez situation, I think this club would be insane to sit him down.  This is in win now mode for the next 2-3 seasons.  If he is showing signs of tiring down the stretch, then I do understand sitting him down.  But right now he has a shot at the AL Cy Young.  Are you seriously going to sit down a potential Cy Young winner in September?!  I’m really stunned we haven’t seen more of Drew Hutchinson spot starting for Sanchez.  But then again, maybe the organization is asking what I’ve been asking, and that is what proof is there that innings limits help a pitchers long term health?  And regardless of that, why is it innings limits that we’re looking at and not number of pitches thrown?  These two things really baffle me.  It’s as though someone in baseball just decided one day that 160 innings was the limit for a young arm and everyone just rolled with it.  How did that help Brandon Morrow?  Remember, the Jays shut him down in 2011 during his best season, and it did absolutely nothing to help further his career.

This club isn’t perfect, but going into the All-Star break and subsequently the trade deadline, they are VERY well positioned.  Could Shapiro and Atkins add another starter?  Yes I could definitely see that, but I doubt it’s anything more than a number 3 or 4 guy.  Someone who is more so insurance down the stretch and perhaps plays the role I suspected Hutchinson would play more this season and spot start a guy like Sanchez.

Another add I could see would be Dioner Navarro returning should the White Sox fall a little further out of things.  He was a perfect backup catcher for the team last season and had great chemistry specifically with Marco Estrada.  The White Sox are a cusp team at the moment, so it’s tough to say at this point if they’ll want to be sellers or not.  Whether it’s Navarro or not, the team could definitely use another catcher to help Russell Martin down the stretch.  Josh Thole simply can’t do the job.

Finally, the pen.  This will be the main focus of management from now until July 31st.  I’m of the opinion that two arms are needed, and one of those has to be a left hander.  The big name that I’m really hoping they’re hard after is Andrew Miller.  If the Yankees are in fact willing to move him, the Jays have to be pushing hard to get him.  I’ve heard some suggest the Yanks won’t move him in division, but I believe that’s BS.  The Yankees could care less about the Jays push for this season and next.  They’re about to be in a full on rebuild.  When the positions were flipped in the late 90’s/early 2000’s, the Jays and Yankees did a lot of deals together.

Miller would just set the Jays pen up perfectly.  They’d still need a right handed middle reliever too as I mentioned (along the same lines as Mark Lowe was last season), but Miller would move into that 8th inning role that Storen was expected to shine in, and it would allow them to use Brett Cecil in more of a specialist role where he would shine, it just sets the whole pen up a heck of a lot better than it currently is.  Of course he wouldn’t be cheap, but the Jays system is still ok even after Alex Anthopoulos took the bazooka to it last year near this time.  And again, this team’s window is open and you must take advantage of that.

Will this happen?  I don’t know, because I don’t have any feel for Shapiro and Atkins and what they’ll do at the trade deadline running a contending team that has money.  Very different situation than what was presented at most deadlines for the Cleveland Indians.

But they’re in a tremendous situation when you consider the only hole on this ball club is the bullpen, and the closer role is solidified so it won’t take a lot to shore things up.  In 2013, 14 or 15 being only half a game up in the wildcard race and 2.5 back of 1st in the AL East would be an insane uphill climb.  This season, as long as they shore up the bullpen and stay healthy, I have very few doubts this team is winning the AL East again, and is a serious threat to win the World Series.