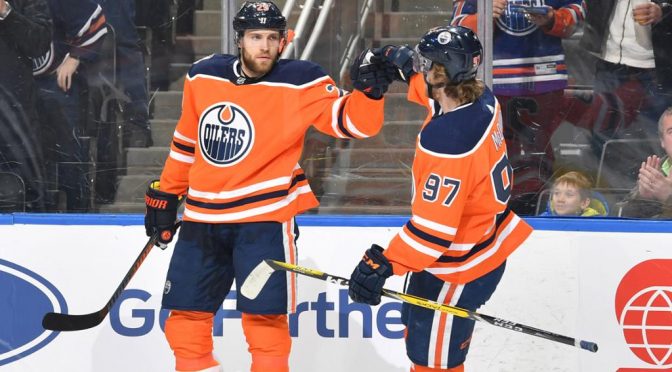 Think about what has happened in hockey in the last month?  Talk about a seismic shift!  And the Don Cherry thing, that was controversial, but nobody is going to disagree with Bill Peters being gone, and the weeding out of just how awful the “old school” coaches were to play for.  That prehistoric way of coaching has been outdated for a while now, but it is still shocking to hear the extent it went to.  And we can debate all day about the motives of the players who are now coming out, in a lot of ways it feels like piling on which I hate, but at the same time it is important to hear the stories to help remove the possibility of these things happening again.

I wish I had more a window to do these in.  Where I fudged up (I’m sorry guys, I fudged up) is not being ready to work on these on U.S. Thanksgiving.  That way I could have had time to calculate my own numbers for each team.  Special teams total, that’s an easy one and something the Oilers are making me look at more.  Percentage of wins in regulation is something I’ve started to look at (kind of like points percentage but I do believe we need to give more love to teams who take the two points cleanly).  And also five on five goals excluding empty netters.  There are lots.  PDO is one I’ve always found to be extremely reliable, simply regulation wins, points percentage (which I listed last time), etc.  I’ll hopefully have time during the Christmas break to add those things up and perhaps come up with some kind of formula to better explain my rankings.

Anyway, the point here is I’m looking at the teams who I believe are closest to the Cup.  I also look at how far into a rebuild a team is with the teams near the bottom of the standings.  With all this being said, allow me to roll out the rankings.

It’s just not a fun situation, and again I’m not sure Rob Blake is the man for the job.

Stevie Yzerman has a lot of work ahead of him.  They’ve lost 8 straight for the 2nd time this season.

I really don’t like where this team currently sits.  They have some good pieces, but barring a big move out of nowhere they look like they’re in a rebuild.

I’m done believing that their young talent is going to emerge.  Bob Murray is going to have to do a lot more.

Last night was rock bottom, and they’re about to trade Taylor Hall (and I’m guessing P.K. Subban could go too).  But they’ve been essentially rebuilding for three or four years now.  As bad as it is, they’re in a good spot moving forward.

They are trying hard to rebuild on the fly, but I’m not sure it’ll happen while Toews, Keith and Kane can still play at a high level.

This has to be incredible for Sens fans given where they were in early April.  Team is getting better, team is loaded with good young talent, and they own their 1st.  Good for them, no fan base deserves what they’ve gone through.

They’re in the hunt for a playoff spot as we speak.  Not sure they’ll get there, but considering how it was looking they’ve done a good job at steadying the ship.

One thing we’ve all slept on this season: They still have Bruce Boudreau behind the bench, and Bruce Boudreau wins in the regular season.  11 of their 12 wins have come in regulation, they aren’t doing it on smoke and mirrors.

Last night’s game doesn’t technically count (though I don’t make a lot of it because the Devils goaltending was just horrendous even by their standards), but they are showing signs that they may get it going again.

Last time around I said they would be the top team in the Pacific by now.  OOPS!!!  Peters mess aside, this team only has 7 wins in regulation.  To put that in context, it is the smallest percentage of their wins (13) in the league at 53.8%.  But they are very much a Jekyll and Hyde team so don’t count them out.

I don’t actually think they are as bad as they’ve been lately.  But Carey Price is their superstar, so when he struggles then obviously they will too.

I still like this team a lot, gave my Oilers fits this weekend.  I just worry that the leadership core isn’t ready yet, but this team is big time on the rise.  Oh, and I HATE their coach (because he’s smart).

There point totals look real good, but if you look closer, this team is ahead of Calgary only for the smallest percentage of their wins being in regulation (61.5%).  So far, Sergei Bobrovsky has been a massive bust, yet they’ve withstood it.  If he can get his game back together, they should take off.

The biggest slide of any team in my power rankings.  The night I wrote the last ones, Nashville had just blown a game against the Flames.  I thought that win was going to catapult the Flames and the Preds would be fine.  Instead, the Flames remained listless, while it was the Preds hit the skids.  It’s mainly goaltending, and I worry Rinne is shot and that Saros isn’t good enough.  We’ll see.

They look like they are figuring it out.  I still hate their speed and goaltending, and they aren’t going to win a Cup barring Doug Wilson severely f***ing over another GM (which is possible), but they are much better than this time last month.

I worry about that blueline for them, and I also don’t like their lack of speed up front.  But A) they were right around where they are at this time last season and B) I’ve learned to not bury this team because they love to humiliate me specifically!

I’m not a big fan of nearly half their points being a result of games going to extra time.  But they are really deep and I’ve never been shy raving about the job John Chayka has done there.

They have a team Sv% of .908 as of last night, and yet they are 6th overall in points percentage this season.  That is IMPRESSIVE!

If Connor Hellebyuck keeps this up, he might not just be in the Vezina discussion, we might be talking about him for the Hart.

7-5-2 in the month might not sound overly impressive, but considering how tough the schedule looked last time around it is pretty impressive.  Even in defeat, you can see this team is right there.  Probably should have beat both St. Louis and Dallas, awful effort in LA, and in their words an awful performance in Denver vs the Avs. Big difference is they are keeping their confidence up when things don’t go well and in the process you can see that it has risen.

I don’t get it other than Barry Trotz is just that damn good of a head coach.

They look great even without Sid.  This window is closing, but in saying that you know that Jim Rutherford will look to load up at the deadline.  Taylor Hall?

How this team withstood the injury issues they had this month, I’m really not sure!  But it goes to show you how good they are.  My concern entering the season was Makar being given Tyson Barrie’s spot…I think he’s doing ok…

They have been pretty inconsistent.  The big thing to watch for is to add a stud between the pipes.  That guy could put them over the top.  But the problem is, who?!

Not at all surprised that they look poised to go on a huge run now that Sheldon Keefe is behind the bench.  Won’t be shocked if they win the division.  But to be a true Cup contender, Kyle Dubas has to address the issues, which are being tough to play against (i.e. gamesmanship, size, grit, etc.) and a backup netminder to ease the workload for Andersen.

Unlike the Leafs, this team is currently built for the post-season.  In the regular season, it looks like a three horse race for top spot in the Central.  However, come playoff time I believe it is only a two horse race to come out of the Central (at this point) and the Stars are one of those teams.

Point totals still don’t look good, the team still hasn’t hit their stride, but they very literally have it all.  And don’t forget: they own the Canucks 1st round pick.  Lottery protected, but in this draft a 1st is gold and could fetch them something big at the deadline.

Last time I spoke about how I wasn’t the biggest Vladdy Tarasenko fan, and I’m not.  But I assumed they’d miss him more than THIS!

We tend to forget if they’d put the Hurricanes away last spring, who knows how deep they could have gone yet again.  Much like Pittsburgh, the window is closing (Backstrom and Holtby both UFA’s) but they look pretty damn good right now.

I will still maintain that I’m not sure how this team is THIS good, but they sure are!