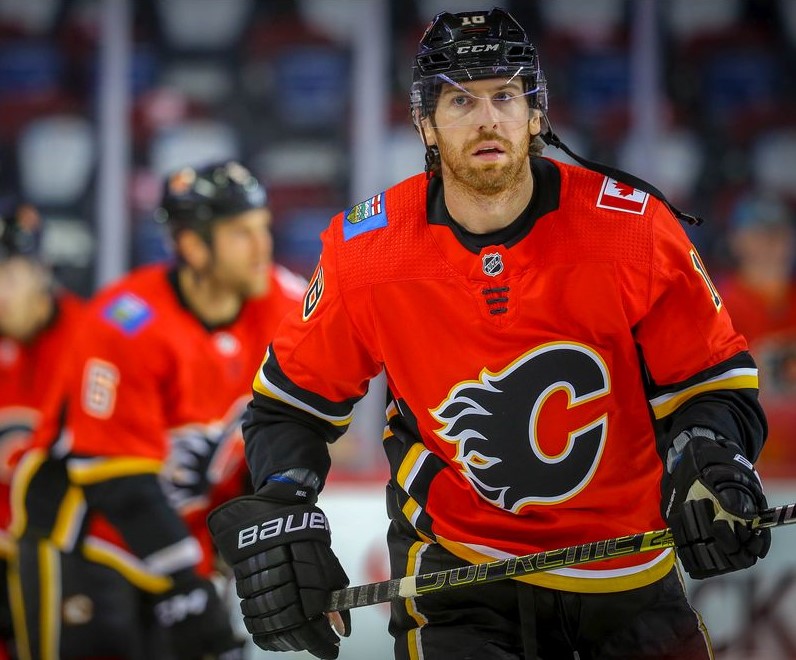 I’ve written a few of these now!  Let’s not lie, because I firmly believe that being completely honest is much more fun and people obviously have respect for it.  I get really annoyed by things that get badly overrated.  It’s a shame it happens to be who it is because the narrative for anyone who reads this will be “typical bitter Oilers fan hating on Calgary” and it really isn’t about Edmonton v Calgary.  I pull for the Flames!  I want the Oilers to beat them more than when they play any other team, but I want the Oilers to beat the Flames at their best, not kick them when they’re down.  And in reality, what I’m bitching about today means nothing.  But I get annoyed by it, and when I’m annoyed I feel like I do my best work, so here it is.

The love that the Calgary Flames get from the national media is nothing short of completely nauseating.  I can’t figure out what it is, but since 2015, this team has gotten so BADLY overrated going into every season by the national media.  At this point, it has truly become head scratching.  And no matter what they do, how badly they underperform, or what wrong moves they seem to make, it doesn’t seem to make a lick of difference to the national media.  My theory for a while was that they all fell in love with the team after their miracle 2015 season.  But now I’m really starting to wonder if something more goes on that we don’t see.  Either way, when you think people might finally wake up and be honest about what their team is, it might be as bad now as it’s ever been.

How much is that roster truly improved from last season?  Brad Treliving (who I have always stated I’m a MASSIVE fan of) lost the Dougie Hamilton trade.  I know it’s viewed as a win for them because they got a bit of an odd duck out of the room.  But people, he’s a top 20 defenceman.  Borderline number one guy.  But for whatever reason, everyone assumes T.J. Brodie is going to step right in for Hamilton, Hanifin in for Brodie, and the blueline will be fine.  Well first of all, that blueline was the most overrated in the league last season.  They were getting compared to Nashville before the season.  Everyone assumes that it is because Brodie has been playing on the left side and he’s more comfortable on the right side as to why he’s struggled.  Did we ever think that MAYBE he just had a career year in 2015 like so many other Flames did?  Did we ever think that MAYBE he just fit under Bob Hartley and couldn’t play in a more structured system under Glen Gulutzan….and if you thought Gulutzan was structured, Bill Peters makes Glen Gulutzan look like Pat Quinn in comparison.  But no, Brodie will go to the right side with Giordano and he’ll be an All-Star is LITERALLY what everyone assumes.  Ok…

Let’s not forget Giordano who is now 35.  He’s not going to decline at all?  Duncan Keith apparently may as well retire at 35, but Mark Giordano is just entering his prime?  I really like Giordano, but I haven’t thought he’s looked anything too special the last two seasons, and wonder if he wasn’t living off Hamilton more than Hamilton was living off him?

Then you have Noah Hanifin, and again it’s just a complete assumption that Hanifin is now a top four D-man, when he was on Carolina’s bottom pairing last season.  I know that Hanifin will be a top four guy at some point, again I’m a big fan (I don’t know if the Flames have a player I really dislike other than Matt Tkachuk and that’s more envy than dislike), but Hanifin is nothing proven as a top four defenceman yet.  His partner to start the season?  Travis Hamonic, who looks shot and if he were an Edmonton Oiler he’d be pissed on by the national media.

Up front, and this is why I believe most like them, they got a LITTLE better.  But they didn’t get A LOT better.  I believe what people are blinded by is the value that Brad Treliving got.  It was actually similar last season when they got Hamonic.  I believe people were so infatuated with what they paid rather than the impact he would have on the team.  And with their off-season pickups, it is a lot of the same.  They didn’t pay AS MUCH as most believed James Neal would cost.  But Neal has only hit 30 goals twice, has trouble staying healthy, is an average skater who is now 31 years old and has taken a beating over the years.  The Preds had no problem exposing him in the expansion draft.  The Golden Knights didn’t seem to mind letting him walk this off-season.  Nobody signed him on the first day of free agency.  But apparently, NONE OF THOSE ARE RED FLAGS…

Austin Czarnik.  A lot of teams were interested in him, a lot of people feel like with a true chance he can be a regular in the league, but he’s going to have a big impact is he?!?  Derek Ryan was a much better bargain than Tyler Bozak, and they’re almost identical as players.  But he’s worth 3 mil?  Paying a 4th line centre 3 mil a year is a great move?  Bringing in a 4th line centre to be a 3rd line centre is smart?  Apparently it is!  And apparently those two players are just going to move the needle tremendously.  This team isn’t going to miss Michael Ferland at all, and they added these three offensive stars up front.

Finally, Mike Smith.  Now, there at least is SOME chatter about Mike Smith being able to both stay healthy and repeat what he did.  But there is zero chatter about the fact that they were just barely in the playoff hunt with Smith playing incredible.  So if he simply drops off a bit this season, how good are they going to be with a SLIGHTLY improved roster?!  This is what I don’t get.  I’m running down this roster (both with my eyes and my words), and I’m not seeing this major improvement, yet it is just a slam dunk for the national media that they’re going to be great.  John Shannon said on HC at noon the other day that he believes James Neal could get 40 goals playing on their 2nd line.  MOTHER FUCKER THE GUY HASN’T GOT 40 SINCE 2012 PLAYING FIRST LINE WITH EVGENI MALKIN!!!!!!!!!!!!!!!!!!  Now he’s going to get 40 seven years later playing with Mikael Backlund?!?!?!?!?!?!?!?  It just drives me INSANE as you can read, not because it’s the Flames and I’m an Oilers fan, but it is so clear that there is something not right with this!  I’m blown away with how overrated they’re getting!

I’m by NO MEANS suggesting the Flames can’t be good.  I have no doubt they can finish top three in the division.  If you think the Flames can finish top three, of course.  Can they finish ahead of the Oilers?  Of course.  They have some really good pieces and should be solid.  It’s the fact that it’s such a lock that the media has them as which drives me nuts.  The Oilers are being shit on, and I both get why that is (I’m not delusional) and honestly prefer it because we’ve seen a lot lately how much expectations can affect teams.  But I might argue the Oilers have fewer question marks than the Flames.  Are the PK, PP, and Cam Talbot all going to be THAT bad this season?  As long as all three are simply solid, don’t have to be anything amazing, just solid, just not horrific, they’re likely back in the playoffs!  And yet those things get glossed over!  Forget that I’m an Oilers fan because I really do try hard to look at things objectively.  The Oilers question marks are pretty solvable.  Not to say they don’t have holes.  The blueline is suspect, Klefbom staying healthy is a massive key, and they’ll need some kids on the wings to really step up.  But the Flames have a lot too and it is impossible not to compare the two teams as a fan of either one will tell you.

I hope the Flames have a great season.  Oilers and Flames in the Pacific division final, how tremendous would that be?!  But let’s just get a LITTLE realistic on this team.  They COULD be good, but why don’t we wait until they prove it to be so sure that they are?