Ok, so maybe I’m not “the king”, but I have to be at least in your top 150 sports bloggers.  So suck on that to that guy in Omaha Nebraska who is 151st, talking non stop about the Cornhuskers and other things of that nature.

Anyway, haven’t done much throughout the summer, but that is about to change.  NFL starting up and I’ll have my season preview and picks for week 1 coming out soon.  World Cup of Hockey starts shortly after that and while I think the tournament is purely a cash grab and quite a joke, I won’t lie.  I’ll still watch.  And maybe I’ll do a little preview on that, or else do some follow up’s on a few of the games and the tournament itself.  Then of course the NHL will start up, College football gets going this weekend, and basically things are going from zero to sixty in the sports world.

The AL East is one of only two divisions in MLB right now that is really a race.  The Indians, Rangers, Nationals, and Cubs all look as though they have their divisions wrapped up, though a September collapse isn’t unusual.  The Jays finally bought themselves a bit of breathing room this weekend heading into their big series with the O’s in Baltimore.  Two up on Boston, three up on the O’s.  I believe that to be their biggest lead of the season.

Now the O’s aren’t a big threat right now.  That starting staff is dreadful, even more so now that Chris Tillman is on the DL.  And they’re coming into this series sitting three games back of the Jays (although two up on the Tigers for the final AL wildcard spot).

While this would not come close to deciding the division, this is a golden opportunity for the Jays to essentially knock the O’s out of the race.  The pitching matchups on paper are all in heavy favour of the Jays, with Estrada, Happ and Sanchez opposing Milley, Jimenez and Gallardo.

But that’s what paper says.  Of course you need to factor in that Marco Estrada hasn’t been the same guy in his last three starts.  Is it his back?  Is it the six man rotation?  I doubt it’s the man who has been catching him, but I would guess that’ll change now that Dioneer Navarro is back and he was of course Estrada’s catcher last season.

You also need to factor in Yovani Gallardo’s success vs the Jays last season.  If you look at the Jays who have faced him 10 or more times, it’s either all or nothing.  Bautista and Martin are awful against him, while Donaldson, Encarnacion and Tulowitzki all are hitting over .350 against him.  The Gallardo we have seen this season isn’t the Gallardo from years past.  He’s been awful.  So the good money would be on the Jays knocking him around, but history does have a way of repeating itself.

The Twins series was exactly what the doctor ordered for the Jays.  The lineup is now finally healthy both literally and figuratively.  Bautista being back, Pillar being back, Travis being back, Donaldson is obviously looking right again, it’s all coming together for the Jays at just the right time.

But this has been a Jekyll and Hyde team of late.  Beating up the Twins staff is one thing, but against the Angels they were awful (by the Jays standards).  We all know about the extremely high strikeout numbers of late.  Yet the next night they’ll get back to crushing the ball.  It is possible that a lot of this has been due to the injury problems they’ve had of late, we’ll see.

This isn’t at all like last year.  Last year, from July 28th on it was just an incredible ride for Jays fans right up until game 6 of the ALCS.  This year, it is looking like a dog fight.  The O’s are in it and can pull into a tie with the Jays.  The Red Sox are even closer.  The Jays get both teams six more times starting tonight.  Boston and Baltimore still play each other seven more times.

Buckle up Jays fans.  That plea of “let’s just be in it come September” that you cried for years is here.  They have a lead, but it isn’t by much, and they haven’t been able to pull away.  Enjoy. 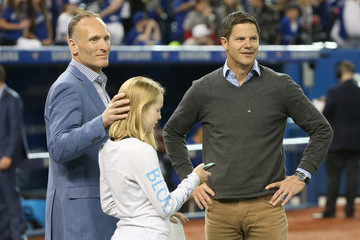 A disappointing end to what looked like would be a sweep of the Orioles going into the 7th inning in yesterday’s game  But the Jays took two of three against the team they’re chasing and left little doubt about the fact that they’re among the elite team in the American League this season and are serious contenders heading into today and the non waiver trade deadline.  So now the question is what will they do?

Mark Shapiro and Ross Atkins have already made a couple of moves acquiring outfielder Melvin Upton and right handed reliever Joaquin Benoit.  But I firmly believe more is coming today.  I have no doubt we won’t see anything major, they don’t have the need, nor the farm system to pull something like that off.  The Tulowitzki injury, even if a stint on the DL is required, shouldn’t impact anything.  Barney is capable of stepping in for him, and Ryan Goins will be back from Buffalo soon.  What we could see is three or even four minor-middle of the road moves that they need to put them over the top.

So with that being said, let’s take a look at what could be done today.

This seems to be something the organization is very interesting in getting done by 2PM MST today.  An upgrade defensively in right field is needed as Bautista is among the worst fielding RF’s in the game.  And while the lineup is as good as any in baseball there is still room for improvement.  Another solid, left handed bat would give this lineup great balance and make life miserable for any starter who faces them.

Josh Reddick – News broke yesterday, FINALLY, that the Jays have talked to the A’s about Reddick.  Former gold glove winner, lefty bat (.296 BA, .368 OBP), he would be a great fit.

Jay Bruce – I still think they’re in on Bruce, but they clearly have competition on him.  He is going to be more expensive than Reddick.  Better bat and a reasonable option for next season.

To me this is the number one need for this ball club.  It is unbelievable to me that after witnessing the great need for another quality lefty in the pen in last year’s playoffs that Shapiro didn’t make it a major priority in the offseason.  I still believe Cecil can help lock things down, but if they’re able to use him in a similar role to how they used Loup last season and upgrade on Cecil, that pen would be in damn good shape.

Will Smith – I think he’s the guy, assuming they are hard after a high end LH reliever and that they can reach a deal with the Brewers.

Sean Dolittle – He comes with big risk as he is injured, expected back in mid August.  But, he’s a top end LH reliever who could come relatively cheap.

Now this is what most believe they’re hard after in an attempt to replace Aaron Sanchez.  Jayson Stark of ESPN had a great piece on the Sanchez situation on Friday that I retweeted which had a lot of interesting tidbits including the average velocity for Sanchez this season that barely changed month to month.  Every month, 95 MPH.  And I really don’t get why you put him back in the pen.  To me, you shut him down in late August or early September and bring him back for the playoffs…should they make it there without their best pitcher and Cy Young candidate…anyway, at the moment, the bigger concern has to be Marco Estrada’s durability.  It’s a legit concern now whether or not his back will hold up for the remainder of the season.  So they definitely need to get a guy, but it won’t be anyone high profile.

Jeremy Hellickson – He’s had a real solid season for the Phillies and having played in Tampa previously he’s very familiar with the division.

Rich Hill – The A’s lefty was appearing to be the top pitcher available at the deadline.  Ironically prior to facing the Jays a few weeks back he was scratched and hasn’t pitched since.  The price for him will have dropped dramatically because of the risk involved.  I do wonder if there is potential for a very large deal with the A’s because Reddick, Doolittle and Hill would shore up the Jays if Doolittle and Hill can comeback and could be affordable for Shapiro and Atkins.

C.C. Sabathia – He is a shot fighter…but he has a connection to Shapiro and he would cost nothing.  He hasn’t been that bad this season, but the durability is a concern.  If he’s healthy though, he’s worth adding.

I’m not so sure this is a need anymore, but I still would be interested in some insurance.  It’s an extremely small sample size, however thus far Joaquin Benoit has looked real good.  If he can return to form, they have a real good arm in the pen.  And Jason Grilli as emerged as a pretty good setup man.  Still, as the Royals showed last season, you just can’t have enough good arms in the pen.  And this really is the only weak area of the ball club.

Joe Smith – He’s not having a good season for the Angels, but he has a pretty good track record as a reliable setup man.  The cost on him as an impending free agent would likely be easy to swallow.

I’m perhaps more certain of this move being done than any other, but it may not be done until August 31st.  The reason for that it will be a move that no team will care to block, and in September the team can then carry three catchers once it shifts to a 40 man roster.  That way R.A. Dickey can still have Josh Thole catch his games, and come October I highly doubt Dickey will be on the playoff roster with the way he’s pitched this season.

Dioneer Navarro – I’ve said it before and I’ll say it again, Navarro makes the most sense to me.  The White Sox aren’t starting him, he’s a free agent, he knows the team, he’s worked with most of the pitching staff (and had a great chemistry last season with Marco Estrada), and Gibbons eemed to be a big fan of him.  I know Shapiro and Atkins weren’t the guys who had him, but it wouldn’t be a big deal so I could simply see it being a case of Gibbons asking them to bring him back.  The cost would be miniscule at best.

This hasn’t been and won’t be like last year’s trade deadline for Jays fans.  There was no way it could be, but there was no need for that kind of action this time around.  Look for the team to plug some of these small holes and be ecstatic should they do it.  And even if they don’t, they can still maneuver.  They’re in a tremendous spot.