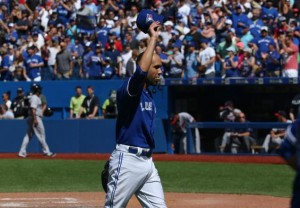 The trade deadline just had to fall on a Friday didn’t it.  I was planning on doing a piece on the Jays after the deadline, then realized it was pointless because it wouldn’t be out until a Saturday, on the long weekend.  Don’t think too many of you were going to spend any part of your long weekend reading my shit.  But now it’s Tuesday morning, you’re all dead tired, hating life back at work even if you like your job.  But maybe you’re still fired up if you’re a Jays fan!  How could you not be?  Trade deadline was amazing, team is playing great, Skydo…Rogers Centre is packed, it’s just a great time to be a Jays fan.  Just like the early 90’s.

The whole series against the Royals felt like playoff games.  Friday night was a great back and forth game, Saturday was a heart breaker after jumping out to a 5-1 lead, Sunday was as emotional of a regular season baseball game you’ll ever see, and then how great was it watching Price pitch out of bases loaded nobody out in the top of the 4th yesterday, only to escape unscathed with Kevin Durant in the crowd recording the final out and the crowd going nuts.  It’s really amazing what’s going on right now, yet when I first started watching the Jays, this was pretty common place.

I’m too young to remember the 85-90 teams.  I know they blew a 3-1 lead to the Royals in 85.  In 87 George Bell won the MVP and they blew a 3.5 game lead with only 7 games remaining to the Tigers, being swept by the Tigers in Detroit to end the season.  But that’s about all I know.

89 was an incredible run when Cito Gaston first took over as manager while they appeared down and out with a record of 12-24, yet they went onto win the AL East.

1990 came down to the last night of the season for the AL East crown and from what I understand a Red Sox team that had an extremely lucky season knocked them out by winning their final game of the year while the Jays lost in Baltimore (the O’s hit a walk off homer in that game but the Bo Sox win had already eliminated them).

I recall starting to watch regularly in 91.  That year they got some guys named Alomar and Carter.  I remember being at my buddies place watching the games debating with him who was better between the 2 new stars.  We were 8.  I spent this past weekend texting the same buddy none stop raving about how sick this is to see.

Those Jays teams were packing what was then known as Skydome the same way they did this weekend.  They were leading MLB in attendance.  The 91 Jays year in review video is titled “Four Million Memories” in honor of them being the first team in MLB history to reach the 4 million mark in paid attendance for a season.

And of course we all know what happened in 92 and 93 so I don’t need to go into detail on those teams.

Of course if I’m showing all these clips, I have to show the best of them all…

But what drew you in was the fact that the park was packed every night.  That atmosphere translates on TV.  You want the games you watch to feel big, and those games all felt big.  This weekend, the games felt big and outside of opening day, there haven’t been too many times since the 94 strike that Jays games felt big at Rogers Centre.

Take the 2000 Jays for example.  That team for some reason gets forgotten about now, but they had a pretty good team.  They led the AL East at the All-Star break.  They were right in the thick of the AL East and Wildcard spots for most of September.  I went to my first Jays game that summer.  In fact it was Esteban Loaiza’s first start for the Jays (let us never speak of that trade again).  While I had the time of my life, I do remember that they drew 27,500 and it was one of the biggest crowds of the season that wasn’t opening day, the Yankees, Red Sox or Expos in town.  They were 52-46 going into the game, it was a Saturday afternoon.  Remember, 27,500 is nearly 20,000 short of a sellout.

That whole season, one of the top offenses in baseball, a 20 game winner in David Wells, in the race the whole season, couldn’t draw.

But this time it is clearly different and it’s such an amazing time to be a Jays fan.  The fan base really believes in the roster Alex Anthopoulos has assembled  They have elite players, young stars, proven vets, great leadership (which was the big issue the last 5 seasons or so), it’s just such a likeable team.  They still got some guys (you likely know who those guys are) that aren’t really embraceable, but those guys are no longer the face of the team.  Donaldson, Tulowitzki, Price, Martin, these are the guys who’ll lead this team for the final 2 months of this season, and hopefully into October.

A couple things I want to hit on before I wrap this one up.  I personally don’t even want to consider Marcus Stroman coming back.  I worry as a Jays fan that he is going to rush things, and what tends to happen when pitchers come back from knee injuries is they over throw to compensate for the lack of strength in the knee which could cause a severe arm injury like a torn rotator cuff.  If he does and he’s fully healthy, awesome.  But the idea scares me.

As for giving so much up for Price for only 12-13 starts…I wonder if Alex Anthopoulos doesn’t know that he’ll have a great shot to re-sign him, because it is completely out of his character to do something like that for a player with no term left past this season, so I’ve been looking at it.

Jose Bautista and Edwin Encarnacion could both be dealt this offseason with only 1 year remaining on their contracts.  Take those 2 out of the lineup, and it’s still a real good lineup.  They would bring back 2 or 3 high end prospects (total, I’m talking high end, each guy will likely bring back 3 prospects apiece).  So they’ll recoup what they lost of value at the trade deadline.  Also, that would clear 24 million, in addition to the 20 million that comes off the books with Mark Buehrle’s deal being done.  44 million to play with in addition to likely having the ability to raise the payroll from 116 million this year to 125-150 million next season should they go on a deep run this season, that gives the Jays more than enough to not only keep Price, but perhaps bring in another one of the big name free agent pitchers this offseason (Grienke, Zimmermann, Cueto, Gallardo, Kazmir, not to mention some middle of the rotation guys like Mike Leake and Jeff Samardzija who they’ve been linked to a lot), as well as fill the holes Bautista and Encarnacion would leave.  That’s my theory anyway.

But let’s worry about next season in November or December.  The Jays are a legit contender for the first time since 1993, enjoy Jays fans!