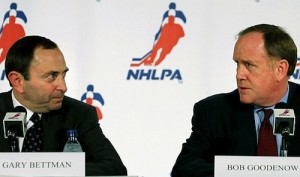 Bob and Gary.  Who didn’t LOVE that soap opera?!  Yes it’s now been 10 years since that fight took place.  At this time 10 years ago, most people already knew we weren’t going to see hockey in the spring of 2005.  The bigger question was, would we see it before the fall of 2006?

Isn’t that crazy it got that bad?  At the time I personally took it for granted because we had been told that was likely going to happen.  The NHLPA basically instructed all their players to tell the media they had been preparing for this lockout and they were ready to miss 2 full seasons of hockey.  Right.  I in no way was buying that, and of course they were one and done.

The players talked one big game at the time.  Bob Goodenow had his guys really believing that there was no way they would ever be accepting an evil salary cap.  And they had every right to believe the man.  Goodenow basically destroyed Bettman in the 94-95 lockout.  But thanks to that, the league was in total shambles by 2004 and was desperate for a complete overhaul.

Not all of this was Goodenow’s fault.  He didn’t put a gun to any of the owners heads and tell them to drive up the prices.  And as we all know now, organizations can be just as good operating on a budget.  But the problem was no GM or owner wanted to study the system and figure out how they could make it work.  Instead they just followed suit of the way everyone else was running it….except Lou Lamoriello, but he would get crushed for having the most boring team in hockey.

The league and the dinosaurs whom they let run it flat out refused to really look at how they could make their on ice product better.  All through the early 2000’s the play on the ice was disgusting.  It was soccer on ice and nobody wanted to upset the apple cart.  You can’t pin that on the NHLPA.  The game was dominated by size, clutching and grabbing, and goaltenders.

The league had no clue how to market.  They had a guy in Mike Modano who was an exciting, personable, good looking, American kid on a big market team.  Modano should have been the David Beckham of hockey, and yet nobody outside of NHL fans knew who he was.  Instead, they focused on marketing the Avs and Wings rivalry that really wasn’t much of a heated rivalry after 1999.

But back to the lockout.  It wasn’t just a matter of the league and the PA being worlds apart.  A deal likely could have been struck within a few months.  No, it was quite literally personable between Bettman and Goodenow.  They denied it, but everyone knew it.  In fact, in late January of 2005 it had gotten so bad, and negotiations weren’t anywhere close to happening between the two sides, that the league and PA had to send the late Harley Hotchkiss and Trevor Linden respectively to meet in Chicago to try to just get the two men back to the table!

Bettman was never going to make a deal, and that I believe is the opinion of most.  He knew the whole time that while he had to negotiate in good faith, he only had to wait the players out for the season.  Which wasn’t an issue because the majority of teams were bleeding money at the time just trying to stay competitive with organizations like Detroit, Toronto, Philly, the Rangers, Colorado and Dallas.  Don’t forget, Ottawa, Pittsburgh and Buffalo all went bankrupt in the early 2000’s.  Keeping the lights out for the season likely helped a few of the owners.

This resulted in destroying the PA.  If Bob Goodenow destroyed the NHL in 94-95, the league blew up the PA in 04-05.  Goodenow stepped down once the deal was finally reached, Ted Saskin took over but that didn’t last long as the players simply didn’t trust each other and Saskin was quickly kicked to the curb.  As was Glenn Healy, Eric Lindros, Trevor Linden, Paul Kelly, on and on and on.

Make no mistake though, the league and the sport was better for it.  They finally decided to take a serious look at overhauling the game to make it more wide open and skill friendly.  No longer was a 5’11 or 5’10 kid deemed far too small to play in the league.  6’5, 240 pound D-men weren’t common.  And teams didn’t have to trap all game just to have any shot against a team as the talent was actually now spread out thanks to the salary cap and linkage between revenues and salaries.

And while the game suffered short term with a TV deal in the States and getting terrible numbers, there is no comparison today.  The game still has many issues, but TV numbers at least in the playoffs are healthy, attendance is great in most spots around the league, and the quality of play on the ice is not even comparable despite scoring not being much higher.

I compare the 04-05 lockout to the very first Hertiage Classic in Edmonton.  I went to that game, and when I got home people asked me how it was?  “It was a great experience, never f***in again!”  It was -25 that day if you don’t recall.  Well, I guess I wouldn’t call that lockout a great experience, but it had to happen….and let’s pray it never gets that bad again.