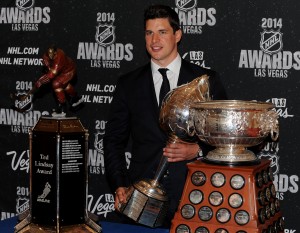 I almost forgot about this part of the preview, but you have to have a piece where you call your shots don’t you?!  I won’t waste much time here, lets just get to my predictions that will be flukes if they’re right and I’ll be an idiot when they’re wrong.

I don’t see why I need to try to get cute with this.  Boston is very clearly the class of the East.  Even if they don’t win the Atlantic, I don’t see anyone beating them in the playoffs.  I know the media is getting real high on Montreal and Tampa, but even though I like the Habs they call their win against the Bruins an upset for a reason.  And Tampa has no size, no experience, and they’re blueline is pretty thin after Hedman.  As for the West, maybe I should take the Blues.  I love the Blues, but they still don’t have a front line center even though Paul Stastny is an upgrade, and they STILL don’t have the goaltender even though I’m a big Jake Allen guy.  And it has to be in their heads now that they can’t get by Chicago.  By rule, the Kings can’t be the choice because I don’t pick repeats, and the Ducks can’t win in the playoffs.  So by that math, the Hawks get through again.

Not much to say other than this.  Of course, a blockbuster trade could change all of this, but I actually like the Hawks to be a team that makes a blockbuster move at some point this season to shore up the team.  They have a boat load of assets to make something happen.

Chances are it’ll be someone else, but this guy is far and away the safest bet and is easily the best all around player in the NHL.

He wouldn’t be my Hart winner in all likelihood, but if he has a big season and the Lightning are over 100 points and challenging the Bruins for top spot in the Atlantic then the media will be drooling over him.  As I said in the preview, his all around game needs to get a lot better.  But it did get a little better last season so I’m looking for that trend to continue enough to net him his first Hart trophy.

Stamkos will come close, but I think Sid will hang on to it.  A little more big time talent playing the PP with Crosby and that’ll be the difference between the two players.

I actually looked hard for another choice because he doesn’t have St.Louis feeding him anymore.  But I simply didn’t see a good option other than Stamkos.  Ovechkin is at least supposed to be As long as he doesn’t slide into another post, that one timer on the PP will lead him to another Richard.

This guy really broke out last season and the Lightning might have gone on a real deep run had he not got hurt prior to the playoffs.  While I’m not going as nuts about the Lightning as some in the media are, but Bishop will be the reason they go anywhere.

I make no secret that I’m a big fan of this kids game and I believe he’s going to win this award at least once so why not this season?  The team improved by adding Paul Stastny, I really believe Jake Allen is going to run with the starting job this year, and so both those things will make AP look even better than he already does.  Won’t hurt either that the Blues are a Cup contender.

I like 4 guys here.  Toews, Bergeron, Kesler, and Kopitar.  I like Kopitar best because he’s never got it and it’s time he’s recognized for his incredible 2 way game and I believe after how great he was in last year’s playoffs that the media will feel the same way and give him the votes.

As always this award will go to the head coach who’s team shocks the media the most, it isn’t really indicative on who does the best COACHING job, but since I have the Sens as my “surprise” pick of finishing 3rd in the Atlantic I’ll call Paul McLean to win it for the 2nd time in 3 seasons.

So there they are, my 2015 prognostications.  Please, resist the urge to tell me how wrong I am on these at midseason.  Not that anyone ever has, but who knows when this website and my popularity are going to go through the roof.  Likely soon, because like….why wouldn’t it?!