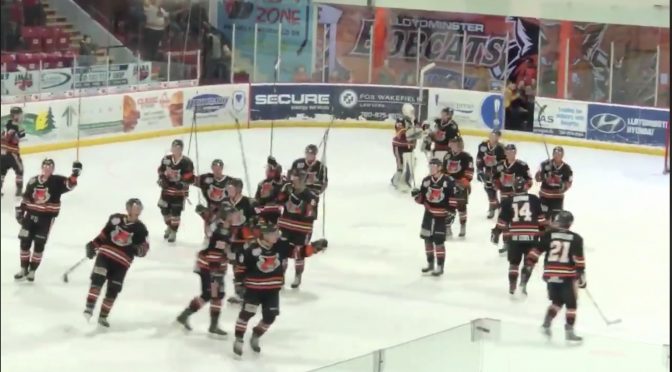 For lack of a better word, it was a special evening at the Centennial Civic Centre.  It’s Gold Horse Casino family weekend, so most of the parents of the Bobcats are in town.  Joining them in the Border City was the number 1 ranked team in the CJHL, the top team in the AJHL with a record of 38-3-1, the defending Centennial Cup champions, the Brooks Bandits.  In case you didn’t gather it from the brief resume I just gave you…they’re pretty good!  But on Friday night, the Bobcats were better as they stunned the Bandits by a score of 4-3.

The Cats showed early on that they were going to match the Bandits speed and managed to get on the board first at the 4:35 in as Cam Aucoin jammed a puck in front and Tanner Mack was Johnny on the spot to make it 1-0.  The Bandits got that one back however at 7:48 as Randy Hernandez stripped Ben Bygrove of the puck deep in the Cats zone and then setup Ryan McAllister to tie the game.  The Cats were not deterred though and at 13:39, after Alex Danis had a strong opportunity turned aside, Ty Mosimann showed off his patience and playmaking ability and found Brendan Morrow cross-crease who proceeded to put it in the empty net and it was 2-1 Cats.  Before the opening frame was complete, Tanner Mack would add his 2nd of the game as he sent a bit of a knuckler on goal that beat Bandits netminder Pierce Charleson, and when the buzzer went to end the 1st, the scoreboard read 3-1 in favour of the home team.

. @LloydBobcats Goal! 🚨 Tanner Mack from 🍎 Aucoin and Ty Mosimann – 4:35 of the 1st Vs Brooks – Replay Powered by @BralinTech pic.twitter.com/TauGL6N2XO

. @LloydBobcats Goal! 🚨Brendan Morrow from Ty Mosimann and Danis – 13:39 of the first 2-1 Cats Vs Brooks replay Powered by @BralinTech pic.twitter.com/z7TEvcqPmJ

In the 2nd it was a different Brooks Bandits squad.  They looked to up their physical game and as you would suspect the intensity level of the game hit a peak.  A total of 10 minor penalties were assessed in the period.  Only one goal in the period however that came off the stick of Bandits forward Chris Pappas who made a great solo effort and then beat Josh Dias short side to cut the Cats lead to 3-2.

As great as the Bobcats effort was in the first 40 minutes of the game, the most impressive part of the evening was their 3rd period.  They didn’t sit back on their 3-2 lead but rather took the play to the Bandits.  Then a little over the midway point in the 3rd, Nolen Coventry took a nice outlet pass from Cam Aucoin right at centre ice and made a gorgeous…and I mean GORGEOUS flip/lead pass that Tanner Mack was able to skate into and put him in alone.  Mack went five-hole on Charleson to complete the hat trick and more importantly give the Bobcats a massive insurance goal.  Shortly after, Chance Adrian would be sent to the box for boarding.  But the Cats penalty kill was just as impressive as their 5 on 5 play all evening.  Several players sold out to block any shot they possibly could.  A great example came on this PK in particular as Brendan Morrow blocked a Bandits point shot, then dove and swung with one hand on his stick to knock the puck into the neutral zone.  And when the Bandits were able to get shots on goal, Josh Dias was there to make the stop, including an incredible pad save on Chris Pappas late in the Adrian penalty.  The Cats finally did give up a power play goal with just 20.6 seconds remaining as the Bandits had a 6 on 4, desperate to tie the game as Trey Thomas would finally put one behind Dias.  But that was as close as the Bandits would get as Dias stopped 23 of 26 shots, and the Bobcats snagged their biggest win of the season.

Going into the game, not only were the Bandits 38-3-1, they had only lost 6 games in regulation over the last two regular seasons.  To say it was an impressive win for the Cats is definitely an understatement.  Needless to say, Bobcats head coach Nigel Dube had a lot of thoughts on his team’s performance after the game.  “I think that group just showed what they’re capable of, and that’s the biggest part of it.  A full 60 minutes.  And it was amazing to see from the coaching standpoint, just to kind of sit back and let the guys do their thing.  And they rallied around each other throughout the entire game, executed, committed to the little areas of the game, and got rewarded in a very big way.”  I asked coach Dube to put into words how special of a win it was, not only because of who they beat, but with all the parents being on hand to witness it.  “When you have 17 or 18 of the 22 families here, that’s special.  There’s no doubt.  Brooks is a team that everybody gives their best against and hopes for the best, and we managed to get one on them.  And I think it’s big for our group right now to realize what we’re capable of”.

This wasn’t some fluke victory where Josh Dias had to play the game of his life, or the Bandits had the worst luck imaginable, the Bobcats were FULL VALUE for the victory Friday night.  Congratulations to the players and coaching staff who have worked their asses off all season, had a lot of brutal luck along the way (especially in tight games at the Civic Centre) and were very deserving of something good coming their way.  Great job boys!!