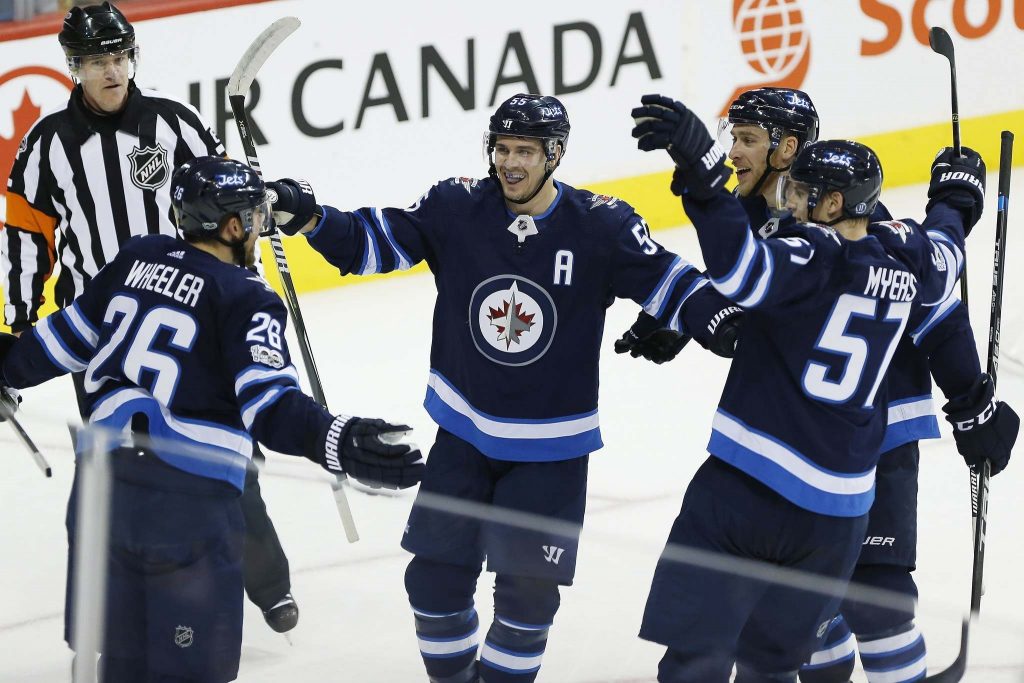 It’s an all Canadian version of the Hot Takes this week.  But how about I don’t start off with Oilers talk today?!  I could, and will get to them later.  But there is another team on the Canadian prairie’s in the NHL who deserve a lot of love right now.  MUCH more love than the national media has been giving them, although I expect that to change today, and that’s the Winnipeg Jets.

All they needed was goaltending, yet they still felt so far away because Kevin Cheveldayoff refused to really go out and address his goaltending.  But luckily, and thankfully for those of us who love to see the Jets thrive, Connor Hellebuyck got his career back on track this season and this team is now on freaking fire thanks to it, sitting first in the West, and tied for first overall in the league with the Lightning (Tampa has a game in hand).  This team is very talented, and very deep, and while I don’t think they’re going to end up as the best team in the West come spring, playoffs look to be a sure thing barring big injury issues.  I don’t believe Oliver Ekman-Larsson is going anywhere, but if John Chayka decides to pull the trigger then you should keep your eye firmly on the Jets.  This team not only is three lines deep, and have a quality top four on the blueline, but their farm system is LOADED!  About the only thing this team lacks is that legitimate number one defenceman.  And if you’re Chevy, how do you not look at the Oilers last season and say “they should have pushed their chips to the middle while they could” and still do nothing?  Again though, I don’t expect that.  But what I’m saying is that if the Jets keep rolling I’d watch for them to be very aggressive at the trade deadline.  Great to see the Jets thriving.  The playoffs are better with the Jets, and the playoffs would be tremendous with a deep run by the Jets.  And they’re built for the playoffs.

Meanwhile you had the Jets latest victim hitting their low point last night.  Who could have guessed that pissing away three assets to barely upgrade at centre hasn’t done anything to help the Sens.  WEIRRRRRRRRRRD.  The Ottawa media seemed to love the trade, and the rationale was so ridiculous.  You heard things like “they didn’t give up Chabot, White or Brown, what a win”.  Wait, so you should grossly overpay for players as long as you don’t give up your top prospects?!  That might be as absurd as the logic I always used to bitch about which was when a top player would come available and people would try to make the argument that other teams would have to give up their top players rather than simply make the best offer, whatever that would be.  Again I’ll go to this example, if the Arizona Coyotes end up moving Ekman-Larsson at the trade deadline, they are moving him to get something for him before losing him for nothing.  There for, nobody is giving the Coyotes a top player.  The Edmonton Oilers won’t have to give up Leon Draisaitl or Darnell Nurse if they want to pursue him.  You won’t see the Leafs offering Auston Matthews or Morgan Rielly.  It’s such stupid logic, yet others just can’t figure it out.  Anyway, the logic the Ottawa media had in all this was along those same lines and it’s ridiculous.  I’m all for bringing in an upgrade on a player and a guy who is a lot more likely to sign in Ottawa long term.  But Duchene wasn’t worth Shane Bowers, a 1st and a 3rd more than Turris.  Good thing that 1st was top 10 protected because right now it appears to be a serious threat to end up in the top 10.  Now, having said ALL this, it’s not because of Matt Duchene that the Sens have fallen apart.  What it could be though….players tuning out Guy Boucher?  This is the exact same pattern as his Tampa team had.  Conference finals game 7 in his first season, started falling apart the next season.  Oh, and if this keeps up, the Erik Karlsson watch could begin….

While I’m hitting on Canadian teams, I want to hit on the Flames.  And I’m pretty damn fair to the Flames on here.  I don’t deny or hide that I’m an Oilers fan, but I try damn hard, maybe too hard sometimes, to keep things objective with the Flames.  I hope the Flames are the second best team in hockey every year!  However something that bothers me is that the national media slurps them pretty good.  Is that a Brian Burke influence?  Ken King?  I don’t know, but I really do get the feeling it’s coming from somewhere, because nobody says shit about them!  So can we be honest?  Right at the moment, they aren’t in a playoff spot, and they just lost their sixth straight to the Oilers.  They don’t have a pick in this upcoming draft until the fourth round, and while it’s a relatively deep system, they don’t have any elite prospects.  Does nobody else believe this is an issue?!  Does nobody else believe that the Flames had damn well not only get in the playoffs but do some damage when they’ve mortgaged the large majority of their damn draft?!  Seriously, who trades their draft to not improve and be a borderline playoff team?!  I’ve been a huge fan of the job Brad Treliving has done, but that Travis Hamonic deal is looking like a train wreck.  They in no way needed him as they already had a great blueline, and he came with a lot of risk, and he’s been awful to this point.  I’m not sitting here wishing the worst for the Flames and looking over my shoulder at every move they’re doing (fans and media who do that are pretty douchey, wouldn’t you agree Ryan Pinder?….), but can the national media please just discuss the Flames fairly?!  For whatever reason they can do no wrong.  And that’s horse shit, they’ve done a ton wrong of late, and the franchise is in no man’s land.  They aren’t built to win a Cup, they’re built to be what the Minnesota Wild have been over the last five years.  They aren’t garbage, and they won’t be garbage, but they aren’t that good either.  Time to take the blinders off.

Obviously the most natural segue here is from the Flames to the Oilers.  Quite the game Saturday night wasn’t it?  I’m not sure the Flames comeback was that great as much as it was Laurent Brossoit imploding, but it sure made for an entertaining game in the end!  And once again this week I’m going to say….the Oilers aren’t done.  And as I’ve said before, it’s mainly because the Pacific division is terrible.  It feels like the season is on the line every night at the moment, and had they blown that game to the Flames I do believe that would have been it.  But they didn’t, and what it feels like is that they’re clearing a lot of hurdles in their last four games.  In the game against Boston, they played a very solid and complete game, full value win.  Against Arizona they won a game they really didn’t deserve to win, which I believe can be huge for a team with no confidence.  Then against the Leafs, despite the Russell own goal that cost them at least a point, they battled back when it looked like they were going to get run right out of the building.  Without Talbot and Larsson, they ended up outplaying one of the best teams in the league.  And I know one of my buddies said it, a few others have said, I really believe with Russell being such a well liked guy in the dressing room that the own goal could end up being a turning point for the Oilers season, something that could bring the team closer together.  Then against Calgary they owned the Flames for two periods, and then survived the comeback.  So you’re seeing these steps, and Ryan Rishaug said the same on Twitter yesterday.  Right now they really don’t look pretty because it’s still a team with shaken confidence, but it’s coming.  They have to put a bigger dent in the deficit this month though as they’ve got a relatively soft schedule.  Even when you look at some of the more difficult games they have, some of those teams are on the second half of back to backs.  They are catching Philly at the right time this week, they matchup well with Montreal, and then the Leafs will likely be starting Curtis McElhinney on Sunday seeing that they play a more important game Saturday night in Pittsburgh.  It’s a big week, but they all are going to be from here on.  Finally, LOVE the Brandon Davidson pickup.  He was great for the Oilers in 2016, really had injury problems derail his 2017, and then never seemed to get much of a chance in Montreal.  He’s capable of being a number five guy in this league, so he’s a great guy to have as your number seven and should mean the end of Eric Gryba’s time with the Oilers who seems like a tremendous dude, but simply can’t play in this league anymore.

Speaking of the Habs….WOW!  That’s the turnaround that Oilers fans are praying for!  10-1, on the 22nd anniversary of Roy’s last game with the franchise, against the team who drove him out of town.  That is some kind of irony.  Obviously it helps that the Atlantic division is worse than the Pacific (which again is why I don’t think the Oilers are done), but this team was left for dead.  Now?  Well, technically they’re in a playoff spot, though the Bruins have four games in hand.  Still, they’re now back into it.  And with Price healthy they have a chance to win on any night.