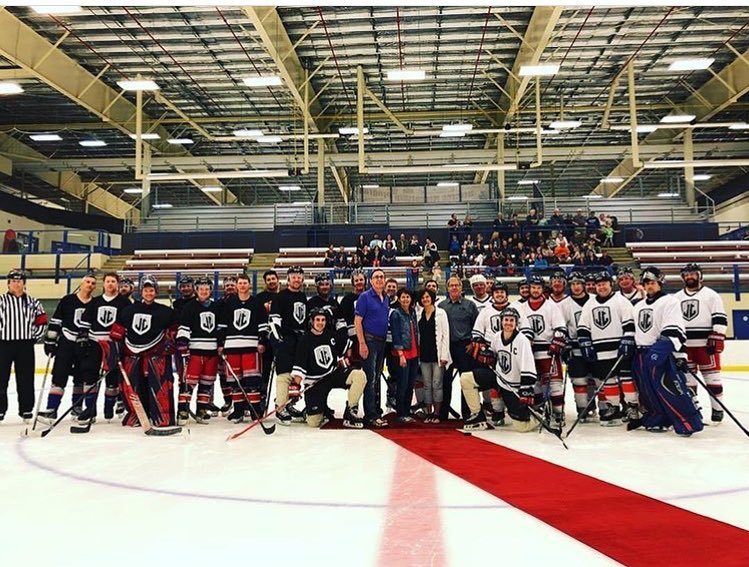 Not a ton to cover this week, but some pretty obvious topics.  Memorial Cup just wrapped up last night in Regina, the Oilers have rolled out their new coaching staff, of course the Stanley Cup final begins in Las Vegas tonight, and for me personally I got to play in a game that meant a lot to me.  So I’ll start with my Saturday night and the Jeff Torry Memorial Cup.

People were watching me play hockey, which made me dread going to the rink that night knowing people would know my great shame, which is that after going 14 years as an unsigned UFA, and three more years of trying to get my game back…I haven’t!  Well, I’m not sure how much I ever really had, but I know I’d be a hell of a lot better now had I been playing all these years.  Anyway, while dreading it a bit from that perspective, I was doing this for Torro.  And the rest of the boys were there for Torro.  And everyone who showed up (which I thought it was an AWESOME turn out) was there for Torro.  Something everyone needs to know about Jeff is that this was one of the truly and genuinely best people I’ve ever met.  I bitch about a lot of people (not an endearing trait), and I can count on my hands the amount of buddies of mine I’ve ever bitched about because they cause me any kind of problems.  I can very honestly say that Jeff was one of those few who just simply would go out of his way to make life easy for everyone.  There were a lot of people involved with the game who were tighter or more connected to Torro than I was, but he was a good buddy of mine and everyone there loves Torro and misses him a lot.  So for everyone who helped organized that event (LRHF), sponsored the jerseys, anyone and everyone who chipped in, I just personally want to say thank you, and I’m sure those thoughts are echoed by a boatload of people.  We raised a lot of money for Project Sunrise and had a damn good time while doing it which is what Torro would have wanted.

Not an easy way to transition to other stuff now, so I guess I’ll just jump right to it.

The Memorial Cup final didn’t end up being the thriller we all hoped it would be, but what a tournament overall.  Final game aside, that was one of the best Memorial Cups I remember seeing.  I’m sure there are others that have been better, but I don’t know if I’ve seen them.  Every round robin game was exciting, and the intensity the semi-final was played with was terrific.  Full marks to the Acadie-Bathurst Titan for the win, they were undoubtedly the best team in the tournament, and they did it with a total team effort.  There were no big stand out stars, just a very solid roster top to bottom who played their system perfectly.  But just tremendous hockey throughout.  Any of those four teams really could have won it.  Think about the Swift/Acadie game.  Swift was up 3-2.  They hold on, how different is the whole tournament?

Before I get to the Cup final preview, a little Oilers talk this week with the new coaching staff being rolled out.  On paper, it’s impressive!  Glen Gulutzan got the Calgary job from doing such a great job while in Vancouver.  Trent Yawney appeared to do a respectable job with the Ducks blueline while in Anaheim, though I put more of that credit towards their drafting and developing.  But Yawney’s big thing is going to be the PK.  Can he get the Oilers PK up to a top ten type level?  He’s done it a few times before.  And then you have Manny Viveiros.  And I don’t care what Todd McLellan says, I really believe that the pp will be Viveiros’ baby.  It is without a doubt THE flaw with the Oilers is their special teams.  And yes, personnel helps.  Washington’s pp is consistently amazing mainly because they have about as perfect of personnel for a pp as you can find.  But the Oilers definitely have the ingredients to be a top ten or even top five pp in the league.  So it’s mainly on this coaching staff, and if they don’t get the job done, Todd McLellan’s job is going to be in serious jeopardy.

So before I begin, it didn’t seem to matter where I went Saturday night, EVERYONE had an opinion on my opinion of the Golden Knights one way or another!  Partied with a few different groups of people, and I heard it from all angles.  Thanks for reading boys!  I assumed maybe four people did, but maybe it’s nine!  But one thing I’ll say is don’t confuse me not being a fan of the Golden Knights with me not thinking they’re going to win the Cup.  I truly believe they’re going to win the Cup.  That team just looks as though they have a feeling of invincibility right now, and I won’t be surprised at all if they sweep Washington.  And it’s not at all to piss on the Caps.  If Vegas sweeps, I believe it’ll be four real tight hockey games.  But Vegas wins those games.

Washington can win this series, no doubt.  I’m sure there are more reasons than this, but I got four big reasons why or how they can win.

But having said all this, I don’t think they will.  I believe the Golden Knights will sweep the Caps.  I don’t know why you wouldn’t believe the same at this point?  They have absolutely everyone committed to playing counter attack hockey, playing 200 feet, they make almost no mistakes, and when they’re getting outplayed Marc-Andre Fleury is just playing on a level that not even guys like J.S. Giguere in 2003 or Jonathan Quick in 2012 played on.  It’s funny, some people who are trying to sell me on why Vegas is so wonderful are getting testy about me pointing out that it’s mainly because of Fleury.  It’s just a fact though.  .947 Sv%.  It’s the all time best of anyone who played a minimum of ten playoff games.  It’s not taking away from their success, it’s just that he’s been far and away the main reason they’re here and anyone in that organization would say the same.

For me, I just hope its a great series.  Seven games, exciting hockey, maybe some OT’s because these playoffs have frankly sucked as a whole.  Two game sevens that were both blowouts, not many OT’s, not many high scoring games, not many hard hitting games, it’s bad by playoff hockey standards.  So I just hope that I’m craving the series to go to a 5th, 6th and 7th game more than seeing it end so others can join me in draft talk for the next month.