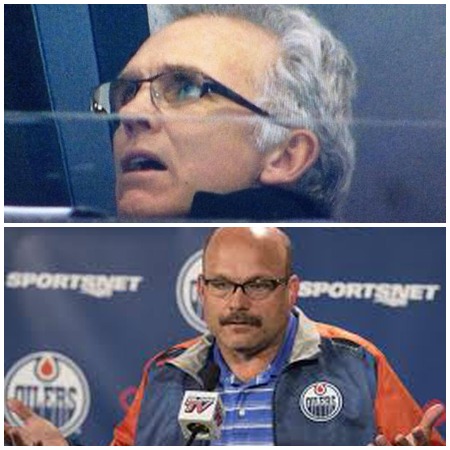 So here is a dirty little secret about me:…well, it’s not actually a dirty secret, and I’m not sure it’s anything scandalous in general.  But here it is: I’ve been wanting to do a “What If” blog for a long time now.  There have been lot’s that I started.  Gretzky not been dealt, Lemieux at the 98 Olympics, Chris Pronger never asked for a trade, the Penguins taken Jonathan Toews, there are a lot of them you could do.  One of my favourites in sports is if the Detroit Pistons in 2003 taken Carmelo Anthony with the 2nd pick in the NBA draft and how huge that would have been for the Pistons success AND Melo’s career.

No, we don’t get a do-over on this one and have the ability to also stick with Todd Nelson even though we all would like to.  This was heavily rumoured to be happening pretty much from the moment Dallas Eakins was fired if I recall correctly.  It was going to be Mac T’s move.  So McLellan is still the guy, even though he shouldn’t have been and that amazing thing that Todd Nelson appeared to have going on was likely legit.

I don’t pin the Oilers inability to land Hamilton on Chiarelli.  It was widely reported at the time that the Bruins flat out refused to do business with the recently departed Chiarelli.  The ask from the Oilers was the same as the ask from the Flames…PLUS Darnell Nurse.  I’m actually stunned Chiarelli didn’t simply say “ok” given what he’s done since!  But that would have been an insane over payment.  If Mac T is the GM though, the Bruins are likely very fine dealing with him.  The package the Oilers could have gave up was VERY similar to the Flames, and I believe according to the draft chart was a little more value than the Flames.  Realistically though, the Bruins would take getting just a tiny bit less in a deal to risk that they could get more out of the Oilers, and they could have given how desperate they were.  So what is the extra piece?  Let’s not go with fantasy, let’s think about what the Oilers had at the time which could have been of interest to the B’s, which thanks to a razor thin prospect pool would have probably been their 2016 2nd rounder, so say bye to Tyler Benson.  Still a deal that many would have been on board with at the time.

Talbot, Sekera, Letestu and Klefbom’s extension in my mind still all get done.  I’ve always felt like Chiarelli didn’t really start to run things until the 2016 trade deadline.  There was no big connection to any of the players he traded for/signed, and the Klefbom extension had to be the OBC because Chiarelli couldn’t have known the player THAT well.  None of those moves felt like they were because of Chiarelli.

With Dougie Hamilton in the lineup, the blueline wouldn’t have been fixed, just improved.  But slotting Schultz more properly would have been huge as we’ve seen it’s been in Pittsburgh.  Now, maybe he still falls apart.  There is something to be said for the East/West differences in style of play and the style of defenceman Schultz is does seem to get eaten up in the West.  But with the pressure off him had Hamilton been there, I just believe it would have made a world of difference for the perception of him in the eyes of management, the media, and the fans.

I mean…who knows?  But I just don’t think Mac T would have pulled that one off.  I know Murray was looking to off load Maroon at the time, so MAYBE he still gets lucky.  But to me it was a move that Chiarelli got from being around the league and his relationship with Bob Murray, I just don’t know if Mac T would have had that one happen.

Mac T wouldn’t have had the balls….or maybe a better word is the stupidity….to pull the trigger on it.  He would have seen Jason Demers out there and said “that’s the better play is to stay the course and bring in Demers”.  Mac T not only had his chances to panic, but painted himself into a corner by saying “bold moves” once he was hired and he STILL didn’t get overly stupid as a GM!  Yes, he royally fucked up with Petry, but in hindsight he never put the team in a position of no return with his decisions like Chiarelli did.  In fact, the reason he didn’t extend Petry was because he was being too conservative.  No doubt that Demers would have been overpaid.  I’m guessing something as bad as 6×6.  But that still wouldn’t have been as bad as the Lucic contract has been, and would have along with Hamilton and better slotting of Schultz improved the blueline more than Chiarelli has been able to.

After that, it’s anyone’s guess.  Russell…I doubt it because the blueline would have then looked pretty set.  Benning?  Probably not as it was Chiarelli who drafted him in Boston.  Eberle might go after the 2017 season, but for Ryan Strome?  Here is the big one to keep in mind and be completely fair though:

6. The System isn’t near as good

The one thing I can’t take away from Chiarelli is that he has turned around the drafting and developing here.  One reason I wouldn’t fear dealing the 1st round pick this season is because they know what they’re doing in rounds 2-7.  I wouldn’t say the system is loaded right now by any means, but it looks really solid.  We’ve got to see Caleb Jones recently.  Ethan Bear is a damn good prospect.  Joel Persson, Maksimov, Benson, Marody, McLeod, Wells, Skinner, Kemp, go down the list.  He has done a terrific job turning the system around.

Having said that, I still am taking what Mac T likely would have done with the big club’s roster over a drastically improved system.  But thanks to this great system, now the next GM should be able to keep it in place and the organization can simply focus on finding someone who can find value in trades and free agency.

It’s amazing to say, but they would have been better off.  Man, what a nightmare this has turned into.  Pretty much everything since winning McDavid has found a way to blow up in their faces.  It’s what happens to people who are poor at their jobs.  Bad bounces find them, and good bounces find people who are good at it.  Look at the Leafs.  Nobody talks about it, but they’ve had some insanely great luck the last four years!  Babcock, Marner, Matthews, and Tavares could EAAAAAAAAAAAASILY be Bylsma, Strome or Hanifin, Puljujarvi and re-signing Bozak.  But they’d still be a damn good organization because they’re so well run.

If it’s me doing the hiring, I want the Oilers to find the best analytics guy they can get to be the next GM of the team.  This position is perfect right now for someone who can find value.  I don’t like analytics guys for rebuilding situations, but I’d love a job like that for this gig.  He wouldn’t get swayed by old school minds or what the media in town thought of the team.  He would just look to get the cap under control, and look to find the best bargains he could given the situation.

Something better happen soon though, because when it has become pretty clear that Craig MacTavish was a better GM then you were, the time has come to (as Mike Commordore would say) pack your shit.