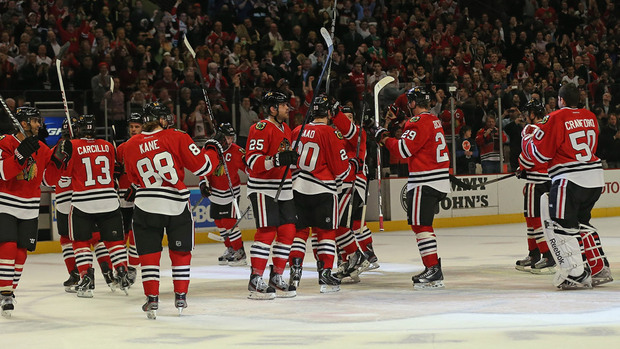 See what I did there?  You thought I was going to say “hot streak” and I danced you like I was Savard and you were Lowe!  Well this is getting ridiculous.  Sure last nights win was in OT against the lowly Columbus Blue Jackets, but this team is getting everyone’s best night in and night out.  Take a look at their loses, Columbus is playing everyone tough…they simply don’t have the talent to win games.  The Hawks managed to survive them and push the streak to 21 last night.  Right now they are Will and the rest of the league are a bunch of Carlton’s and Cornflakes.  Their only loses have been in shootouts.  Nobody seen anything like this coming.

Remember last year?  The mighty Blackhawks had completely lost their swagger that they were known for the 3 years previous.  This was a young, cocky team.  But last season they simply lost their way.  Corey Crawford after having such an amazing series against Vancouver in the 2011 playoffs, came crashing back to earth.  Patrick Kane’s off ice behaviour was seemingly hurting his development.  Duncan Keith was no longer looking like the all world defenseman he once was.  This team lived and died with Jonathan Toews.

They got smashed by the Oilers last year, twice!  9-2 (although I wrote on this website at the time that it was clearly a product of them going to Vegas on a team trip after the game, they mailed that one in).  Then of course the Sam Gagner 8 point game, where they blew a 2-0 lead, losing 8-4.  They also lost to the Oilers once in Chicago.

In the playoffs they were stoned by Mike Smith, but even though they were out shooting Phoenix game in and game out, they seemed to lack fight.  Again, they were totally dependent on Jonathan Toews who could only do so much.  Rumors were everywhere that Head Coach Joel Quennville and GM Stan Bowman weren’t even on speaking terms anymore, and it was only a matter of time before either Quennville would resign or Bowman would fire him.

What a difference a lockout makes.  I had a feeling they would win that first game of the season in LA after some knob in the Kings organization thought it would be a great idea to parade the Cup around the ice before puck drop.  Because that wouldn’t fire up the former champs at all I bet, not to mention that it’s literally a workout lifting that Cup.  In 25 years of both playing and watching hockey never once have I heard a coach or a trainer suggest that someone go bump weights minutes before puck drop.

Its probably a good time to write this piece now, because I actually have to believe that in Detroit for a Sunday morning game against the Wings is a pretty good bet as to where this streak could finally end.  Mind you before that I would have thought facing the Blues in St.Louis would have been an even better bet and they made the Blues look horrible in a 3-0 win.  But also, the last time I wrote about a teams hot streak was last Saturday about the Raptors, who went 0-3 since….all 3 at home….2 against awful teams.  The Soups curse is now in full effect for the Hawks, so I apologize to all Hawks fans if this kicks in again.  It was my intent to sing their praises, not ruin their season.