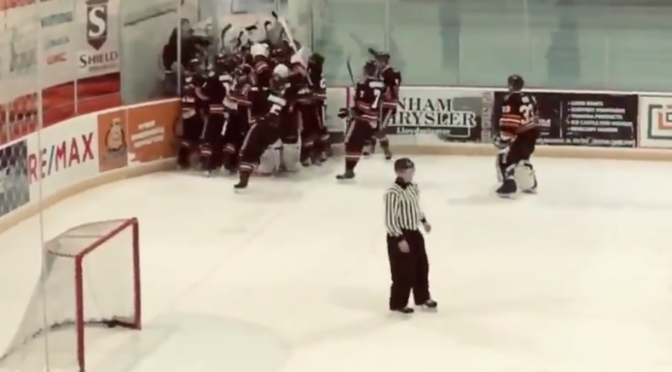 Just 0:50 into the game it was the Storm’s Jackson Wozniak getting a hold of a rebound and riffling it past Cats goaltender Garrett Larsen, and quickly it was 1-0.  Then, just as the Cats had killed off their first penalty of the game, William Schimek made it 2-0 Storm at 8:02 with a shot from the point that Larsen didn’t see.  2-0 and not even 10 minutes in, just a night after a real solid effort where nothing went right, those are the ingredients to say “oh woe is me” and drag your feet the rest of the night.  “You go down by 2, but there is a ton of hockey left.  And for this leadership group to rally the troops on the bench and to understand that with composure they can crawl their way back into it” said Bobcats head coach Nigel Dube after the game.

The Cats began that crawl at the 11:15 mark of the 1st as on the power play Chance Adrian showed good vision finding Brendan Morrow in the high slot.  He was denied, but Ty Mosimann was there to put home the rebound and allow the teddy bears to begin covering the ice.  Storm took that 2-1 lead into the room, but the momentum was in the Bobcats favour.

And it carried over to the 2nd frame as at 8:46, once again on the power play and after some very good puck movement throughout, the puck would end up on the stick of Mosimann who this time found Mack Stewart in the slot for the redirection and the game was tied at 2 and would go to the intermission with that same score.

As the 3rd moved on, the Cats began to really take over the hockey game.  Twice late in the period, Brendan Morrow made great plays attacking the net and forcing the Storm to haul him down resulting in power plays.  If not for the play of Kaeden Lane late in the game, the Storm would not have left the Civic Centre with a point.  He held the fort for them however, and we would go to OT, still 2 apiece.

The Cats simply weren’t going to be denied on Saturday as by the time overtime hit, they had imposed their will on the Storm and taken control of the game.  After controlling the play and a few good chances, Mosimann gained the zone and then found Adrian the trailer in the high slot and he ripped a wrist shot past Lane to give the Cats the 3-2 victory.  Without a doubt this was a character building win for a club that is starting to really grow the past few weeks.

Mosimann and Adrian were the offensive stars for the Cats, but it was a big night for the Cats defensive star of the game which was Garrett Larsen.  The native of Waukesha, Wisconsin got his first win in the AJHL and was full value for it with 29 stops.  “A big win for him to get his first junior hockey win and the quality of our tandem is a big part of this team” Dube said.  Things may not have started right for him, but like his teammates Larsen stuck with it and throughout the game you could see his confidence growing.

Opportunity now knocks for the Cats.  Currently 8 points back of the Fort McMurray Oil Barons in the standings, but they own a game in hand, and they travel to the Casman Centre for a back to back Friday and Saturday.  There isn’t just 4 points to be had, it’s a possible 4 points to be gained and all while maintaining that game in hand.  Taylor Pope will have the call of both those games on Hockey TV, and you’ll be stuck with me for the next Bobcats home game with Shane Tomayer away on business, I’ll have the call on the December 4th game at home vs the Spruce Grove Saints.  So perhaps even more reason to make it down to the rink, but if you cannot then check out my first ever play by play call on Hockey TV, or the MixLR app.