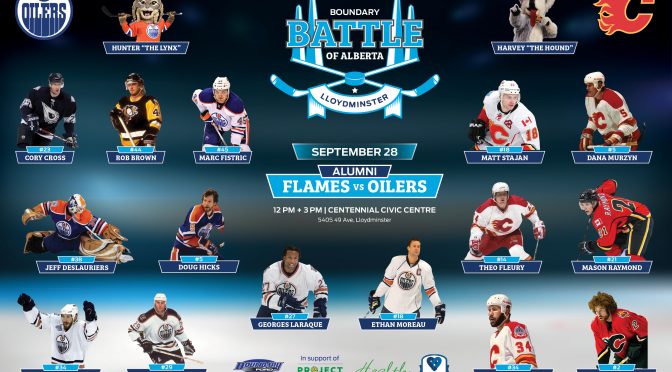 Saturday afternoon, Oilers alumni will take on Flames alumni as the Boundary Battle of Alberta will take place and the Lloydminster Centennial Civic Centre.  The 3 PM game is sold out and has been for months now.  However, the noon game was added and there are in fact still tickets available for it.  Just go to http://lrhf.ca/bboa or go to Boundary Ford to pick yours up in person.  Proceeds for this game are going to the mental health initiative Project Sunrise.  For me, that’s the big seller.  I’m a guy who has fought with ADHD, anxiety, and depression.  I hit the trifecta some might say!  But it’s nothing to make light of and I know what I’ve gone through and don’t wish it on anyone.  It’s constantly on my mind.  I never want to make people feel the way that I do when I’m at my lowest.  So that is near and dear to me.  But for a lot of people, they want to know what exactly they’re going to spend $25.00 a ticket on.  Well, thankfully I’m here for you!  Allow me to lay out exactly who will be taking the ice this Saturday in Lloydminster.

The only man in the game who didn’t play for either team, however, Brown likely sees himself as an Oiler these days as an in-game analyst on 630 CHED broadcasts.  Brown had his breakout season in 88-89 as he put up an eye-popping 49 goals and 115 points in just 68 games.

The local boy doesn’t get the recognition he perhaps should for etching out the career he did.  The 1st overall pick of the 1992 supplemental draft went onto play 659 games in the NHL, 113 of them with the Oilers.  Perhaps the highlight of his career was this massive OT goal playing for the Leafs against Wade Redden’s Sens at the height of the battle of Ontario.

Debrusk came to the Oilers in the fall of 1991 in one of the most famous deals in team history which saw Mark Messier shipped to the New York Rangers.  One of the most feared players in the mid-late 90’s, DeBrusk played 401 NHL games in his career, 228 of them with the Oilers.  He remains a fan favourite today doing a terrific job as the colour analyst for the team’s TV broadcasts on Sportsnet West.

The top pick of the 2nd round in the 2002 NHL draft, the man known to Oilers fans as JDD first came on the scene early in the 08-09 season as he put on a show in back to back starts against the Devils and Rangers stopping 77 of 80 shots against in those two games.  JDD also got 48 starts during the 09-10 campaign.

A 1st round pick of the Dallas Stars in the 2004 NHL draft, Fistric was dealt to his hometown Oilers right before the start of the lockout shortened 2013 season.  Fistric got into 25 games with the Oilers that season, 325 in his NHL career.

Cold Lake’s own was the 6th overall pick in the 1974 NHL draft by the Minnesota North Stars.  Hicks played in 561 games during his NHL career, 186 of them with the Oilers.  In fact, Hicks best statistical season came with the Oilers in their first season in the NHL as Hicks had 9 goals and 40 points in 78 games.

Big Georges remains one of the most popular Oilers not named Gretzky, Messier or McDavid.  Perhaps the top enforcer in the NHL during his time with the club, Laraque was the 31st pick in the 1995 draft and as it turned out he was far and away the top player of that draft for the Oilers.  695 NHL games in his career, 490 of them with the Oilers.

When Moreau was named the captain of the team prior to the 07-08 season, I don’t recall any debate about it.  It was as if the fan base just collectively said “he better be”.  Moreau was a warrior for the organization.  The 14th overall pick of the 1994 draft, Moreau came to the Oilers the morning of March 20th, 1999 in a blockbuster deal that saw Boris Mironov go to Chicago.  928 games in the NHL, 653 of them with the Oilers.  As I mentioned, he was named captain of the team prior to the 07-08 season, which ironically may have been the most difficult stretch of his career.  Just seven games into the 06-07 season, Moreau needed to have reconstructive surgery on his shoulder.  Then in the 07-08 pre-season, he fractured his tibia blocking a shot, which forced him to miss the first 48 games of that season.  He then returned for 25 games, until yet another set back as he broke his leg and was done for the season again.  Some might hang up their skates after such an awful stretch.  Moreau however played nearly a full season in 08-09 for the Oilers and in doing so received the King Clancy Award for best exemplifying leadership qualities on and off the ice and by also making significant humanitarian contributions to the Oilers Community Foundation.

If you’re an Oilers fan, then without a doubt your fondest memories of the club in the last 25 seasons came in the spring of 2006.  That entire season was special as it finally felt as though the Oilers could legitimately compete with the rest of the league thanks to the salary cap.  But after a bit of a disappointing regular season that saw the club really struggle to get in the playoffs, they went on an amazing run.  And right at the forefront of that run was Fernando Pisani with his unbelievable 14 goal performance.  The Edmonton kid was an 8th round pick of the club in the 1996 draft and clawed his way up the ranks before finally getting his shot during the 02-03 season and once he got his spot he never gave it up.  He played 462 NHL games, 402 of them with the Oilers.

I didn’t realize before writing this that there is a big backstory to Hunter already posted here which is awesome so I don’t feel the need to make something up!

#PackYourShit and get out to see this guy on Saturday (see what I did there?!)…Commodore only played 18 regular season games in his career with the Flames, but it was where he broke through as a full-time NHL player, and he actually played more playoff games with the Flames (20) than regular season as he was a key contributor for the Flames during their amazing playoff run in 2004.  Following the 2005 lockout, Commodore would capture a Stanley Cup with the Carolina Hurricanes.  He ended up playing 484 NHL games and has stated on numerous occasions how Mike Babcock was his all-time favourite coach to play for…well…maybe that’s incorrect…

If you don’t know this man’s incredible story by now, I’m not sure what you’re doing.  In 2009 he released his best selling autobiography Playing with Fire which is an absolute must read if you haven’t already.  Fleury was a rookie when he won the Cup with the Flames in 1989.  Six times he led the Flames in scoring.  He currently sits 5th for the Flames all-time in games played (791), 2nd in goals (364), 3rd in assists (466), and 2nd in points (830).  He represented Canada in the 1996 World Cup of Hockey, the 1998 Olympics, and the 2002 Olympics where he helped Canada win their first gold medal in 50 years.  Fleury played in 1,084 games in his entire career, and finished over a PPG (1,088 points).  The numbers are there to someday be enshrined in the hockey Hall of Fame.  And of course we can’t be talking about the battle of Alberta without mentioning that he scored one of the most famous goals in the history of the rivalry.

Another key member of the 1989 Stanley Cup champion Flames team.  Macoun was one of the Flames top shutdown defencemen on a team that was one of the best in the league during the mid to late 1980’s.  Macoun played 586 of his incredible 1,128 career games with the Flames.  On January 1st, 1992 Macoun was involved in the biggest trade in NHL history, more famously known as the Doug Gilmour deal, and would go on to play a big role in the Maple Leafs revival as a franchise in the mid 90’s, before moving onto Detroit at the 1998 trade deadline where he would capture a 2nd Stanley Cup championship.

The 3rd of the Flames alumni to play on the Flames 1989 Cup winning team.  The Calgary born Murzyn was initially the 5th overall pick by the Hartford Whalers in the 1985 NHL draft.  Murzyn was dealt to the Flames midway through the 87-88 season, Murzyn appeared in 21 of the Flames 22 playoff games during their run in 1989.  He would be dealt to Vancouver in March of 1991 and was a big part of the Canucks success in the early to mid 90’s as they would go onto win back to back Smythe division titles, followed by a trip to game seven of the Stanley Cup final in 1994 (though Murzyn had his run cut short due to injury in those playoffs).  He wrapped up his career in 1999, finishing with 838 career games.

The former Camrose Kodiak and Calgary native came up with the Vancouver Canucks during the 07-08 season and was a key contributor for the Canucks on their 10-11 squad which went to game seven of the Stanley Cup final.  After a season in Toronto, Raymond would sign with the home town Flames for the 14-15 season, a team which was expected to be near the bottom of the league.  Not only were they not near the bottom, they shocked everyone in the hockey world as they snuck into the playoffs and knocked off his former team the Canucks in the 1st round.  The speedy Raymond would finish his career with 546 games played.

Selected by the Leafs with the 57th pick of the 2002 NHL draft, he was dealt to the Flames during the 09-10 season.  Like Raymond, Stajan was a key member of that amazing 14-15 Flames squad, and scored one of the most important goals of their run in game six vs the Canucks.  The game was tied with under five minutes to play and it was Stajan who stepped up with game-winner as the Flames won their first playoff series since the 03-04 playoffs.  Stajan would go onto play 1,003 NHL games in his career, 558 of them with the Flames.

Much like Hunter, I can’t do Harvey the Hound justice quite like the write up that can be found here, although we can’t talk BOA and Harvey the Hound without re-living the time Mac T got his tongue.

These are two great rosters which have been assembled.  It is pretty rare to see this kind of talent take the ice in Lloydminster.  More importantly, the money that will be raised for such a tremendous cause.  It is an absolute win-win.  Again, go to http://lrhf.ca/bboa or to Boundary Ford to pick yours up in person.