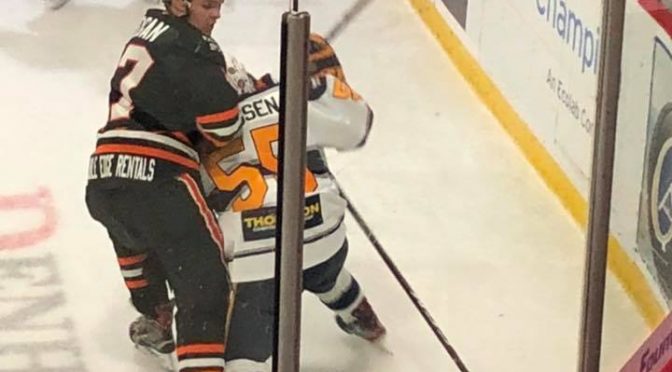 The Lloydminster Bobcats knew they faced an extremely difficult task opening the season with a home and home against the defending regular season AJHL North division champion Sherwood Park Crusaders, followed by a game against the defending post season AJHL North division champion Spruce Grove Saints.  And while the battle level was there again for the Cats last night, the results were not as they fell at home to a very talented Saints team by a 6-1 score.

After a 1st period where not much happened and the game really lacked flow, things picked up in the 2nd as the Bobcats Cam Aucoin opened the scoring at the 2:32 mark, going top corner short side on Saints starting goaltender Max Duchesne.  A bit of a controversial goal tied the game for the Saints as Stanley Cooley hit Nathan Edwards in stride, very close to being offside but nevertheless, the Michigan commit made no mistake as he went top shelf with a backhand up over Bobcats netminder Garrett Larsen to tie the game.  Saints took the lead later on in the period on the power play as right off the face-off Stanley Cooley again the playmaker, this time spotting Cam Mitchell high in the slot for a perfect redirect, and the Saints went into the 2nd intermission holding a 2-1 advantage.  The Saints managed to get the jump on the Cats just 0:24 seconds into the 3rd as again it was Mitchell as the Nebraska-Omaha commit was able to walk into the Cats zone and let go a bullet top corner on Larsen for his 4th on the season.  Then just 0:55 seconds after that it was WHL alum Ryan Peckford scoring his 3rd goal in as many games to make it 4-1.  Jordan Biro would get in on the action at the 6:55 mark with an excellent tip off a shot that it looked as though Jaxsen Wyatt may have fanned on extending the Saints lead to 5-1.  Finally, Brett Trentham would pour a little more salt in the wound for the Cats with a late power play goal to close out the scoring.  Final shots on goal in the game were 40-13 in favour of the Saints.

The outcome looked the same as Saturday night, but I felt the Bobcats actually played a much stronger game in a lot of area’s.  For large stretches of the game they were very solid on the defensive side of the puck, Garrett Larsen made some really big stops and was both tracking the puck and staying square to the shooters all evening, I felt Ryley Hogan bounced back with a good assertive game tonight for the Cats as well.  It is a very young team, they haven’t played much hockey together as of yet, and their first three games of the season are against what very easily could be the two best teams in the league this season.  A very difficult task for any team in the league.

I asked Cats head coach Nigel Dube for his thoughts after the game.  “I thought for us, after the media timeout in the first period that we came out and pushed back.  And we probably had a 25 minute slot in there where we did good things, leaned on their D-men and got things going that way.  At times when we got away from the game plan and put pucks into the walls and off the area’s that we were targeting on the ice, they’re a team with speed, had momentum coming North on us and we gave them opportunities.  But we just need to regroup and go get them on Friday”.  Dube would like to see more discipline shown from his team next game.  “We took hooking, slashing, holding and high sticking.  Four penalties, two in the offensive zone, sending us to the penalty kill when we really don’t need to.  The penalty ratio was really off-set, and some of those we were deserving of tonight.  It’s something to work on.”  As the Cats move onto Grand Prairie for a set this weekend, Dube is looking forward to the challenge.  “You look at our first three, Sherwood Park, Sherwood Park, and Spruce Grove, now we’re playing hockey.  We come to the rink tomorrow, we’ll touch on a few things in video, and get on the bus to go to GP.  They’re a young team as well.  It’s their home opener so we have to be prepared for that.  But for us, we need to start shooting pucks and get back to our 10 shots a period minimum.  No matter where they’re coming from, we need to find a way to start being shooters.”

Puck drop in Grand Prairie both tomorrow and Saturday night is set for 7:30 PM, and you can catch all the action on Hockey TV.  Cats next home game will be Friday, October 4th as they take on Hayden Clayton and the Whitecourt Wolverines.  Puck drop for that game will be 7:30, and if you can’t make it down to the Civic Centre then you can check out Shane Tomayer and myself as we’ll have the call on Hockey TV, and on MixLR.