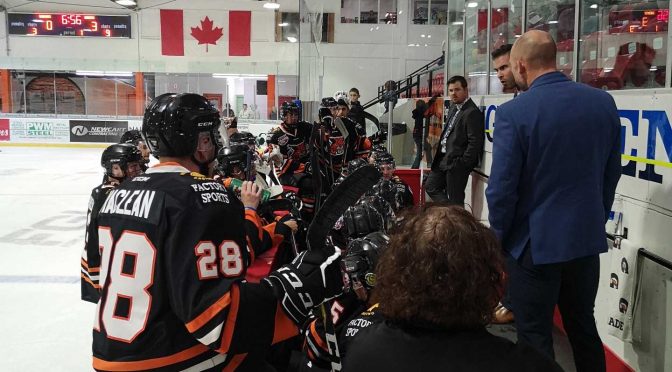 On any given day, you can start off with the best intentions, work as hard as you can, set out to do everything the correct way, yet everything still conspires against you.  We’ve all had days like that.  Last night, that happened to the Lloydminster Bobcats.  After a very promising showing in Sherwood Park Friday night, the Bobcats simply could never get their game on track in the return bout Saturday night at the Centennial Civic Centre as a very talented Crusaders squad took it to them all night, defeating the Bobcats by a score of 6-0.

It was an uphill battle for the Cats right from the get-go as just 11 seconds into the game a costly turnover led to a Kaden Bryant goal.  Then at the 12:16 mark Bryant put home his second of the game on a shot that Bobcats goaltender Cale Elder got a piece of, but not enough and it was 2-0 Crusaders after one.  Bobcats head coach Nigel Dube turned to Garrett Larsen to start the 2nd frame, however it was more of the same as the Crusaders put the pressure on and at the 5:14 mark Jacob Franczak made a beautiful stretch pass to Jarred White who had cheated into the neutral zone and he made no mistake going top shelf on the backhand which put the Crusaders up 3-0 and it would remain that score after 40 minutes of play.  The Bobcats entered the 3rd with a 35 second five on three power play, and despite not being able to capitalize on it, they were finally gaining a little momentum before Ty Mueller abruptly ended that as he fired a laser past Larsen to make it 4-0.  That goal seemed to really suck the life out of the building, as that goal was followed by goals from Franczak and Bryce Bader.  Three goals in 59 seconds from the Crusaders and it would remain that way as the Crusaders walked away with an impressive victory.

It felt from the broadcast booth that the Bobcats were badly gripping their sticks all night long.  Nothing was coming easy for the club.  Full credit to the Crusaders who have one of the best teams in the AJHL and will do what they did to the Bobcats to many teams in the league this season.  But the game the team played Friday night in Sherwood Park was impressive.  They weren’t intimidated by the Crusaders, they played loose, they showed they could take a punch and get right back up and keep fighting.  Saturday night, the effort level was still there, but the execution was far different.  They were two very different games.

After the game, Bobcats head coach Nigel Dube was taking the blame for the loss.  “As a coaching staff we’re six games in including pre-season and that’s on us to find a way to get these guys ready.  Tonight, we were off.  And when you play a team like Sherwood Park who is picked to probably win the league, you can’t be off, and as a coaching staff that’s on us.”  Dube went onto say “we had a little hiccup here in a couple area’s but we’ll be back to it tomorrow.  We’ll find ways to continue to grow.  19 new bodies and I can’t say that forever, but out of the gate here we’re going to have to learn and as a coaching staff we have to learn and execute what it takes to get these guys prepared every day.”  The schedule doesn’t lighten up at all either, as the defending North division champion Spruce Grove Saints are up next.  “For us, now we got to find the on.  We have a few days here, our practice on Monday and Tuesday will be structured a little bit different and we’ll look at it as game one on Tuesday and we’ll be good.  For us we can’t have being on and then being off.  Onus is on the coaching staff to sit down tonight, sit down tomorrow and execute a plan that’s going to help our guys and give them the resources to be better the next day.  That’s on us.”  It would have been VERY easy for Dube to point fingers after a disappointing home opener, but he showed great leadership with how he handled things.

The Saints roll into town Wednesday with a 2-0 record after sweeping their home and home this weekend against Drayton Valley, game time is 7:30.  If you can’t make it to the Centennial Civic Centre, then Shane Tomayer and myself will have the call on Hockey TV and on MixLR.

One thought on “Nothing Goes Right as Bobcats Drop Home Opener”