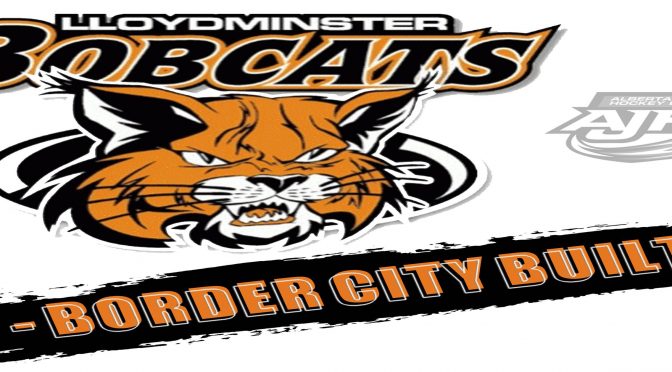 I believe the last blog that I did for this site specifically, I talked about my love for badonkadonks on beautiful women and how summer sucks/fall is awesome.  Real Pulitzer Prize winner stuff, I know.  But now we’re REALLY into fall, because hockey is getting fired up!  NHL camps have opened, and junior hockey is getting underway!  I got a couple of nephews debuting in Flin Flon tonight for the Bombers as they make the move from the AJHL to the SJHL (good luck tonight boys!!), and the AJHL season also gets underway, specifically the Lloydminster Bobcats who’ll start off with a home and home against perhaps the favourite’s in the AJHL North this season, the Sherwood Park Crusaders.

Before I get rolling on the Cats and what the 19-20 season could look like, let’s talk about more local hockey action that will be seen at the CCC this season and that is the Boundary Battle of Alberta.  As you can see from the banner, the lineups are really coming together nicely.  At this point and time I’d give the advantage to the Oilers both in numbers, and the Flames lack of a goaltender at this point.  Trevor Kidd?  Fred Brathwaite?  TSN personality Jamie “noodles” McLennan?  Joey McDonald who wore some of the most deadly gear of his generation?  It remains to be seen!  But in reality, we are well aware that nobody is worried about the on-ice result.  The big thing is supporting Project Sunrise, a mental health initiative which the proceeds are going towards.  I’ve had my struggles with mental health, plenty others in my life have, it affects us all greatly and we need to do what we can to battle it.  Just $25 bucks a ticket gets you a great afternoon of hockey and goes towards a great cause.  If haven’t got your tickets yet, what’s the wait?

Back to the Bobcats…

The tale of the 2018-19 Lloydminster Bobcats is a pretty simple one to tell: what could go wrong, did go wrong.  After a 5-13-1 start, head coach Travis Clayton was let go, and new head coach Nigel Dube was brought into a scenario where they were already looking towards the 19-20 season.  It quite frankly wasn’t a lot of fun to go watch the Cats last season.  They hit rock bottom, ending up with a 9-49-1-1 record.

But now they have a completely fresh start.  Being around the team the last few weeks, the big thing that stands out is what they appear to have in head coach Nigel Dube.  Dube is not only determined to build a proper foundation with the Cats, but he has tremendous attention to detail.  The type of talent he has assembled, the structure he is implementing, the environment he has created both with the staff and in the dressing room, it is all very carefully orchestrated.

Maybe the most exciting part about the Bobcats going into this season isn’t that they have the makings of a team that can really compete.  Obviously that’s never going to be bad, but it is the bonus.  This team is really set up well.  I believe it is at 13 kids with at least three more seasons of junior eligibility starting the season with the club.  Through camp, it looks like a team with more talent, more structure, but one that can be sustained which has been a big problem for the organization throughout it’s history.

If you just go by their goal total in the pre-season, you might think that they’re going to lack offensive firepower this season, scoring six goals in four games.  But watching them (especially on Saturday), I’m actually really excited for what they have.  To my eye, Dube is going to have a lot of firepower up front, it’s just a matter of how he wants to use his talent.  Chance Adrian, Tanner Mack, Nolan Coventry, Alex Danis, Ty Mosimann, and Tyler Schendel all are kids who stood out in my opinion as players who are capable of putting points on the board, and it’ll just be a matter of how Dube wishes to run his lines.  Load up the top six, or spread it out through the top nine?  He also appears to have the makings of a very good shutdown unit with Cam Aucoin, Mason Hendrickson and Chad MacLean if he so chooses to run one.  Safe to say Dube is still mixing and matching a bit himself at this point, but I like the options available to him.

The best way to describe the blueline is that its old school.  Not in the sense that they’re a bunch of coke machines who can’t skate, but old school in that they really know how to defend and play without the puck.  I’ve said this a million times before and won’t ever stop saying it: hockey is not played three on two.  If a team is bad defensively, it is not solely on the defence.  Having said that, you want your defencemen to be strong in their own zone.  There will be nights where the Bobcats are out skilled, nobody is going to claim otherwise.  So you HAVE to know what to do when teams start dominating possession.  In the pre-season, we saw this.  In the two games I saw, the team didn’t give up much five on five.  It’s all anchored by 19 year old Gunner Kinniburgh.  He is going to be heavily leaned on by Dube this season and likely to see a ton of tough matchups, but he appears ready for the challenge.  He won’t be alone though as Ryley Hogan (the teams “elder statesman” at 19 years, six months and 29 days…) and the very recently acquired Kaeden Tenkoppel will also be required to do some of the heavy lifting.  It is my understanding that Tenkoppel should really fit the Bobcats well both on the ice and in the room as he is a very smooth skater and a terrific kid off the ice.

It is very possible that the strength of the club is right where you’d like it, which is between the pipes.  Dube is going to have two great options between the pipes with the returning Cale Elder, and newcomer Garrett Larsen.  Elder has the pedigree, and is very capable of being a number one goaltender.  But the Waukesha, Wisconsin native Larsen has put on a show thus far in camp and the pre-season.  A diminutive goalie, listed at a likely generous 5’10, it is the only hole that I have seen in the kids game to this point.  Last Saturday I couldn’t shut up about how terrific he was in the Cats crease as he ended up with a 36 save shutout in their 3-0 win against the North Battleford North Stars.  I said it on the broadcast during the pre-game show that he was perhaps who I was looking forward to seeing play the most that evening, and he managed to exceed those expectations.  If his play continues, and Elder plays up to his capability, there won’t be a night this season where the Bobcats have to worry about who is in goal.

Last season is done, and things can only go up from here.  Should anyone be planning a trip to the RBC Cup in May?  No, but I like the chances this squad has of being a good competitive squad this season.  It could be the start of some damn good AJHL hockey in town for years to come.  Tonight’s game against the Crusaders will be on Hockey TV starting at 7PM MST with Crusaders play by play man Brendan Escott on the call, then tomorrow night the two teams clash at the CCC.  If you can’t make it down to the game, Shane Tomayer and myself will have the call on Hockey TV and also on Mixlr.com and the Mixlr app.