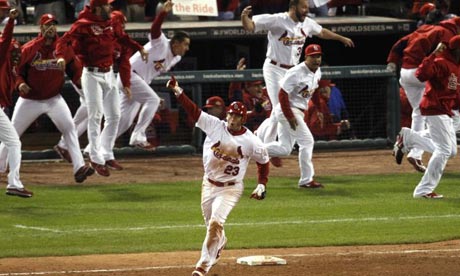 I was saying to one of my good friends a few weeks back “I just really hope MLB has a good playoffs, because it’s been a while”. My friend (what’s up C-Bass?!), die hard MLB fan, took a minute to think about it and seemed to agree. I can name numerous amazing games and series in the MLB postseason from 95-02.

But the point is just about every postseason in that time was memorable and filled with great games and great plays. Since then, it just seems like they have been few and far between. The playoff races seemed to fizzle out by mid September and the playoffs didn’t produce much.

The 05 White Sox didn’t have a particularly loveable team and really steam rolled through the playoffs. 06 was better and the Cardinals were a fun underdog to follow that season but at the same time the Tigers steam rolled through the AL only to be hammered in the World Series. Outside of game 7 between the Cards and Mets, and game 3 between the Yanks and Tigers, they were really all non descript games/series.

07 was a World Series sweep, an NLCS sweep, 3 LDS series sweeps, and really the only memorable game was the 1 game playoff between the Rocks and Padres. 08 produced a great ALCS but a disappointing World Series and again none of the LDS series were very good. 09 the World Series went 6 but unless Lee started for the Phillies the games weren’t really competitive and prior to that once again the LCS and LDS series lacked intrigue. 2010 was BETTER but not great.

2011 finally said enough is enough! Just when it looked like we were headed for another average postseason with all the playoff spots being set, the Red Sox and Braves both choke down the stretch which produced the greatest night in the regular season baseball has ever seen, and then 3 of the 4 LDS series go 5 games, every single game came down to the final pitch. UN-FREAKIN-REAL!!!

The LCS series were a letdown from what the LDS series were, but still both series went 6 games. The Tigers and Rangers had a couple of classics. Just when you thought the World Series was about to be 2-0 headed back to Arlington for the 2nd year in a row the Rangers stage a terrific 9th inning rally to even up the series. Then came game 5 with the series tied and the infamous 8th inning phone debacle which seemed to swing the series in the Rangers favor.

What needs to be said about game 6 other than in my opinion it was the greatest game ever played. And game 7 put an explanation point on the Cardinals Cinderella season. Sure the Cardinals and Rangers were not the sexiest teams, but likeable teams with some big star players none the less.

If you couldn’t get with this MLB postseason you aren’t a sports fan.