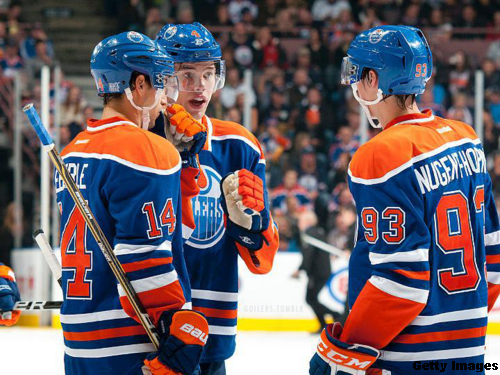 They’re ready to jump off a bridge.  It’s all ending.  Added to the misery of Canada losing at the World Jr’s in Edmonton is the fact that once again there beloved Oilers are near the bottom of the NHL standings.  “Fire Renney!  Fire Tambellini!”  That’s all you are hearing these days.  Whether it’s on message boards or call in shows, all the fans are losing there minds.  They have no right to, not yet anyway.

You see 2 years ago at this time this fan base was PLEADING for a proper rebuild.  Kevin Lowe in particular (as it was still pretty much the team he built at that time) kept trying to build through free agency and trades.  They had a garbage farm team in Springfield after years of not even having their own.  So every fan was on board for a rebuild and to not just rebuild but do it the right way.  Pick a lot at the top of the drat much the way the Penguins, Capitals, Blackhawks and Kings had done.  Get an actual AHL farm team and develop players properly, don’t rush them like they had done with Cogliano, Smid, and Gagner.

Now here we are 2 years later.  The 2nd year of the rebuild.  You read that right, the 2nd year.  And fans are losing it.  Why?  Did all of you not understand what you were asking for?  Clearly, you didn’t.  The Oilers are amassing an incredible group through the draft.  Hall, Nugent-Hopkins, Eberle are going to do very special things in Oiler silks.  Some fans are giving up on Magnus Paajarvi…he’s 20 years old.  Also have Tyler Pitlick, Curtis Hamilton, they will likely deal Sam Gagner at some point but if they don’t he is finally taking a step forward.

They also have some very nice defensemen who are still a few years away but they’re coming.  Oscar Klefbom was awesome for Sweden at the WJC, David Musil, Martin Marincin, Martin Gernat, Colten Teubert, all these kids look like they could play in the league.  None of them look like they will be number 1 defensemen, but a lot of number 1 defensemen don’t look that way when they’re young.

They will likely get a 1st round pick once they deal Ales Hemsky.  A top 5 pick in this draft at this point looks like it will get them one of Ryan Murray or Matthew Dumba.  Both potential number 1 defensemen.  With that late 1st they could get for Hemsky they might be able to land there goaltender of the future in Malcom Subban.  And that’s assuming they don’t already got it.  They’ve picked 3 tendy’s in the last 2 years.  2 of them (Bunz and Tohimma) are having great seasons, and the book on Perhonen was that he would need a lot of seasoning but had the highest upside of any goaltender in last year’s draft.  A freak athletically.

So Oiler fans….stop freaking out.  I get it, the team started off amazing and you all thought that the rebuild was done.  Next time don’t be so stupid.  It was a hot streak.  You all asked for this, you were all on board for this, and you are in prime position to be an elite team in the next few years and stay there for a long time so shut up already.  If at this time next season the team is still hanging out near the bottom of the standings, then you have the right to start questioning the coach and the GM.  By next season they should start being a top 8 team, but not now.  I know it’s been terrible in Edmonton for 6 years now, but it’s only the 2nd year of the rebuild.  You’re time is coming soon I promise.