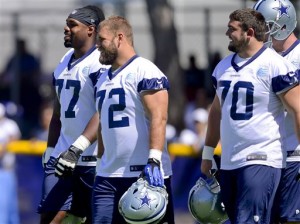 I say this a lot but I truly believe it.  Pro sports are much better when the traditional powers are in the mix.  The Habs and the Leafs in the NHL, the Lakers and the Celtics in the NBA, the Yankees, Red Sox, and Dodgers in MLB, and the Packers, Steelers, Niners, Raiders and of course the Cowboys in the NFL.

This season wasn’t expected out of the Cowboys as you all know.  I had been one of their few defenders over the past few seasons and even I gave up on them (at least to be a playoff team).  But they FINALLY figured it out.  Run the ball.  It milks the clock, it helps out the defense immensely and it opens up even more for Tony Romo who is an elite QB.

I once heard Chargers hall of fame QB Dan Fouts ask “how can we score too quickly?” when talking about his Chargers and the air Coryell offense of the early 1980’s.  Well Dan, you can because those guys need a break.  They’re on their heels the entire time.  Defending takes a lot more energy than being on offense does because you have to figure out who is going where.

When you come out on D you can’t be worn down and the Cowboys D always was with the way Romo and the offense could instantly put points up.  Now this doesn’t mean Dallas has a great D, but it helps a lot.

And what more can be said about that O-line?  Unreal, and those kids are just getting started.  It isn’t the flashy way to build a team, but once you have a QB, the focus of drafts should be shoring up your offensive and defensive lines.  Controlling the line of scrimmage at any level of football is VITAL.  If the Cowboys are able to snag a pass rusher or DT in the draft like an Alvin Dupree or Arik Armstead they might be scary good next season.  And this season they’re looking like a legit Super Bowl contender in the NFC.

As for the others playing today, it is a pretty vital game for everyone except the Bears, although even the Bears are still alive at 5-6.  But to get Eagles v Cowboys and Seahawks v Niners with heavy playoff implications is awesome!  Should be a great day of football and here is who I like….

It’s a big number, but can anyone trust the Bears right now?  On the road?  Against a real good and pissed off Lions squad?  No.  Maybe the Bears keep it close, but the smart bet here IMO is the Lions -7.

This line is currently paying out over double.  I don’t know why that is, but it is.  You can’t trust the Cowboys in this spot, and Chip Kelly is a far better coach than Jason Garrett.  The over/under in this game is 56.5!!  Don’t bet that, but take the Eagles getting 3, likely soon to be 3.5.

Ok so there is a rule over the last 2 seasons with me picking the Seahawks, for or against.  Go the other way of what I pick.  The last time I made a correct pick on the Seahawks was in week 2 last season against the Niners.  My thinking is that the Niners are more desperate in this spot, and the Seahawks aren’t the same team on the road.  But who knows, I’m only picking it because there are only 3 games.