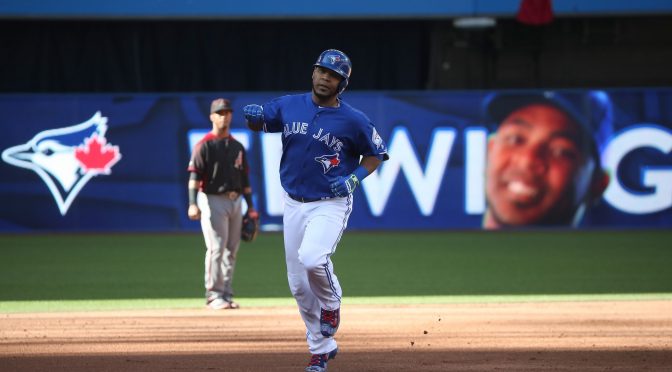 Well I can honestly say I hadn’t loved another man with a parrot in Rogers Centre since the great Koko B. Ware rode in a small mobile wrestling ring cart at Wrestlemania XI.  Never again did I believe a man with a parrot could steal my heart, yet Edwin Encarnacion did just that.  It wasn’t a real parrot, unlike Koko, who had Franky, and Franky was HILARIOUS, but the parrot was there in spirit nonetheless.  But the parrot is being walked on out the door, and it really is a shame now that we know how it shook down.

Truth be told, I was good with him leaving after the season.  I was looking at some of the possibilities, fully trusted (obviously still do) Mark Shapiro and Ross Atkins, and felt like there were better moves the organization could make than to get tied down with a long term, big money deal for a soon to be 34 year old DH.  It was already the oldest team in MLB, too right handed heavy, not quick enough on the bases, Encarnacion just simply wasn’t a great fit…at what was thought to be the price.

But now that we know what we know, did both sides overplay their hand?

We know Encarnacion’s camp did.  Edwin made it pretty clear that Toronto was his first choice, and almost felt like he was reluctant to go to free agency.  Maybe that’s just the Jays homer in me, but if he wasn’t being sincere he sure fooled me!  But it really did feel like he was more so advised…as he should be…to go get the big contract.  I worry for his sake that even though he’ll get that big contract (though not near as big as his camp thought he would), that he’s not going to be happy elsewhere.  I guess it depends on the team he goes to.  Winning can help alleviate any problems he may have.

I wonder though if the Jays aren’t going to regret moving on so quickly from Encarnacion though as well.  It was the right move, and I’m a pretty big fan of the Kendrys Morales signing.  I think in this lineup, playing in Rogers Centre which is a much more friendly park for power hitters, 35-40 bombs honestly wouldn’t shock me in the least.

The Steve Pearce signing (which of course is the reason we now know Encarnacion’s time in Toronto is done) I like too…depending on who he’ll be platooning with.  He crushes lefties, and seems to love Rogers Centre (loves hitting against the Jays anyway), so that could be a ton of bang for their buck.  Again though, that all depends on who he is platooning with.  If it’s Justin Smoak then I’m not too happy.  If it’s Mitch Moreland, I’m a little more happy with that than Smoak, but still feel like an upgrade will be needed by July 31st.  It wouldn’t dare be Rowdy Tellez already…would it?!

So I like what the Jays have done to this point.  If by March the front office has only added Jay Bruce and Boone Logan to this team then I’m not happy.  But so far, so good.

But I can’t help but wonder if they couldn’t have got Encarnacion for 3 years/60 million or somewhere in that range.  Because it sure is starting to feel like without the Red Sox chasing him hard that the market just isn’t there for the now former Jays slugger.  I absolutely get not wanting to sit on your ass and running the risk of being left with nothing, but it will really suck if this guy ends up in Baltimore or Texas for that price.

As for the Jays and what is next, as I eluded to early they still have a ton of work to do.  Dexter Fowler intrigues me, as I’m still a believer in having a guy who is comfortable in the leadoff role, but more importantly it just would give them more speed on the base paths.  The numbers being talked about are comfortable to me, and as Arden Zwelling tweeted yesterday, the Jays have quite a bit of money to play with after doing the deal with Pearce.

Again, trust this front office.  So far, they haven’t given Jays fans much to bitch about.  And as I said off the top, I’ve been fine with Encarnacion walking sine the offseason began.  But should he walk for a deal that’s at or less than the Jays offer of 4×20, that’ll be tough to stomach for all Jays fans.