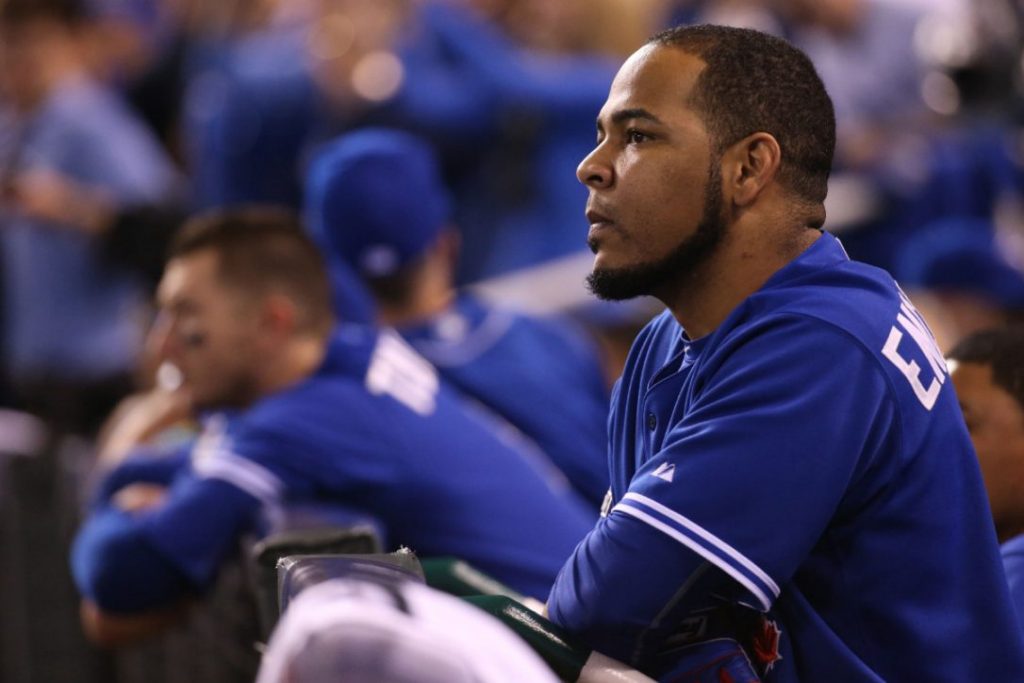 Well I don’t know about you, but that sucked worse than last year for me.  Last year, you had a red hot and experienced KC Royals team that felt like the favourite in the ALCS.  I’m a pretty big fan of this Cleveland Indians team, but the Jays on paper were heavy favourites, especially with all the injuries to the Tribe’s starting staff.  Even at 3-0 a lot of my buddies and myself were looking at the pitching matchups and saying “they beat Kluber, the Tribe are in a ton of trouble.”  But it wasn’t to be and the better team won in five.

That’s the bad news.  There is a lot of good news with this team moving forward.

Lost in the September swoon that had the country on pins and needles as to whether or not the Jays would make the playoffs was the hiring of Ben Cherington.  Who is Ben Cherington?  He’s the former GM of the Boston Red Sox.  He built much of their 2013 World Series winner.  He is responsible for them having arguably the best farm system in baseball entering this season.  Betts, Bogaerts, Bradley, Moncada, Benintendi, Swihart, they’re LOADED with young talent both on the team already and still to come in the system.  Things don’t always go as planned, but I’d be surprised if under this regime the Jays don’t have at least a top 10 farm system in two years time.

And if that’s the case, that young talent could arrive just in time, as this isn’t a young roster.  Josh Donaldson is 31 next season, Troy Tulowitzki just turned 32, Russell Martin is about to turn 34, and if they keep one of Encarnacion or Bautista, Encarnacion will be 34 and Bautista turned 36 yesterday.

I say one of, because I believe they have to let one of them walk.  Both are DH’s at this point, but even if you put one at first and the other at DH, you’re ensuring that the lineup stays as is and that simply can’t happen.  Cleveland’s staff didn’t pitch a great series, despite what everyone has and will say.  What happened is that the ALDS was a mirage.  Cole Hamels and Colby Lewis were amazing matchups for the Jays, and Yu Darvish just had a poor outing in game 2.  Teams have figured out how to pitch to the Jays, and they refuse to adjust.  So they need to mix in some left handed or switch hitters, and they need to mix in more speed.

If you ask me which one of them you let walk…you put up with a guy like Bautista when he’s got one of the biggest bats in baseball.  I have to think his act has gotten REAL old in that clubhouse.  I’m a Jays fan, and while I have liked his bat, I’ve never liked the guy.  I don’t think he’s a bad guy, but I know for me he would be a guy that you could get sick of real quickly with some of the garbage he pulls.  He’ll be the cheaper option of the two, but I’d be willing to do a four year deal with Encarnacion.

It is very possible that the organization lets them both walk.  With such an old roster I wouldn’t suggest that they’ll want to get younger, but they may want someone in that position who they don’t have to commit to long term.  So perhaps Carlos Beltran?  They were interested in him at the deadline, he’s a switch hitter, despite being 39 he’s coming off an outstanding season hitting 29 HR’s, 93 RBI’s, .295 AVG and a .337 OBP.  Tough to expect THAT again, but close to that would be pretty great.  In doing a move like this, you would also keep more of your options open for the 2018 free agent class that is shaping up to be incredible.  Still a couple years away, but no doubt management will be keeping an eye on it.

Something that became evident as a need this October is a good backup catcher for Martin.  He was gassed in the playoffs, and he was gassed last year in the playoffs despite Dioneer Navarro seeing a lot of his AB’s.  A left handed or switch hitting backup who can be trusted defensively (so probably not Navarro at this point) is what is needed.  A guy like Jason Castro is probably too good to be true, but he’d be perfect.  He is the only guy who can hit left and is solid behind the plate on the free agent market, so if they’re going to find this guy they’re going to have to trade for him.

As for other needs…I could see them making a big run at Josh Reddick in free agency.  Lefty stick (hope you don’t get sick of me saying this!), former gold glove winner, and a guy who hits for average.  Hasn’t been great since being dealt to the Dodgers, and wouldn’t be cheap.  But I think he’s a perfect fit for this Jays team.

They could use a leadoff man.  Most sabermetric fans will tell you a leadoff man is a myth.  I lean that way as well, but over the last two years the lineup has been at it’s best with Jose Reyes and then Ben Revere leading off.  Jose Bautista didn’t work.  Troy Tulowitzki didn’t work.  Devon Travis didn’t work.  The only other guy that kind of worked was Ezequiel Carrera, and the jury is definitely going to be out on whether he was a guy who simply got on a hot streak, or if he can continue to improve.  I love his approach, love his swing.  I’d be willing to try him as a platoon with Melvin Upton.  But I’m not sure either are the answer at the top of the order.

Speaking of LF, what about Michael Saunders?  I’d say he’s another candidate to be a short term answer at DH if he’s willing to accept a two or three year deal for reasonable money, but it’s tough to gage what kind of deal he’ll get.  He’s not a terrible glove in left, but again I would think Shapiro and Atkins would like a guy who can hit at the top of the order and that’s a prime position to find those types.

They need a big time lefty for the bullpen much like they did last offseason, but I really hope they look to use Francisco Liriano in that role.  He’d have to be ok with it, but should he be I’d rather he be a 14 million dollar Andrew Miller than a 14 million dollar 5th starter.  You can find 5th starters, and in my opinion you should want to leave that spot open for a value signing type guy.  Look at how valuable Miller has been to the Indians.  That type of guy isn’t easy to find and the Jays may have him with the type of stuff Liriano has.  C.C. Sabathia was rumoured to have interest from the Jays at the deadline due to his relationship with Shapiro, perhaps he is of interest to them as a free agent?

I don’t think the pen needs much work next season.  If Liriano did start the season there, they’ll definitely be picking up the option on Jason Grilli, and Joe Biagini should be able to improve on this season so that gives them a rock solid back end of the rotation.  Joaquin Benoit is a free agent that I’m sure they’d have interest in bringing back, as is Brett Cecil.  Cecil has been up and down with this team but I’d want him back as well.  Even at his worst he can still get left handers out.  And he’s likely the 3rd best lefty reliever on the open market, if not the 2nd.  But having said that, you never know the trade options which could be out there.  I was livid that they didn’t touch the pen last offseason and then they did the Storen deal, which obviously went sideways before flipping him for Benoit, but at the time looked like a fantastic move.

Then of course you have the big want for just about all Jays fans.  I know hardly any of you would have read this, but do you recall what I suggested a year ago at this time?  I’ll refresh your memory….or it’ll be your first time reading this.

People might laugh at this notion, but I’m going to put it out there.  I could see Joey Votto at 1st to start next season.  The Reds are rebuilding.  Votto has a monster contract which the Jays could afford to take on.  The Jays lack a big left handed bat.  The Jays lack a guy who’ll hit for average in the middle of the order.  He’s a former gold glove winner.  And for ownership to sign off on bringing such a big contract in…he’s a Toronto born player.  It is totally just a hunch, I haven’t even seen Votto’s name mentioned in rumors.  But Anthopoulos has pulled trades out from seemingly nowhere a few times before, and this would make sense.

That was written on October 24th, 2015.  Of course, Anthopoulos is gone now.  But rumours have really heated up about this since around the trade deadline, and word is that the Jays are very interested should the Reds move Votto this offseason, which is a very real possibility.  He is 34 next season, but there isn’t a more perfect fit for this team at 1st base than Joey Votto.  .326 BA this season, .434 OBP!  A left handed bat that doesn’t just simply go up there looking to hack, what a concept!  The Reds would need to eat some money on the back end of the deal, but if they were willing to (they pretty much have to if they want to move him, the contract is an albatross despite how great Votto is) I could see the Jays landing him.  I also want to say that Votto has a no move?  I would guess that’s 10 and 5 rights which is basically the same thing.  I’m sure if he were to be dealt he’d have interest in more teams than just the Jays, but the fact his hometown team is a contender and he would be such a great fit at 1st and in the lineup, I’m certain would put them near or at the top of the list.

Yesterday sucked, no doubt.  But this team is setup.  They’re setup for next season, and next season this front office will begin setting them up for the next decade.  As shitty as it was to see them get bounced in the ALCS for the 2nd year in a row, they appear to be here to stay.  The AL East will be tougher next season with the Yankees on the rise and the Red Sox being so young and already so good, but the Jays are in excellent shape.  I don’t think we’re going to see things go back to the way they were anytime soon.