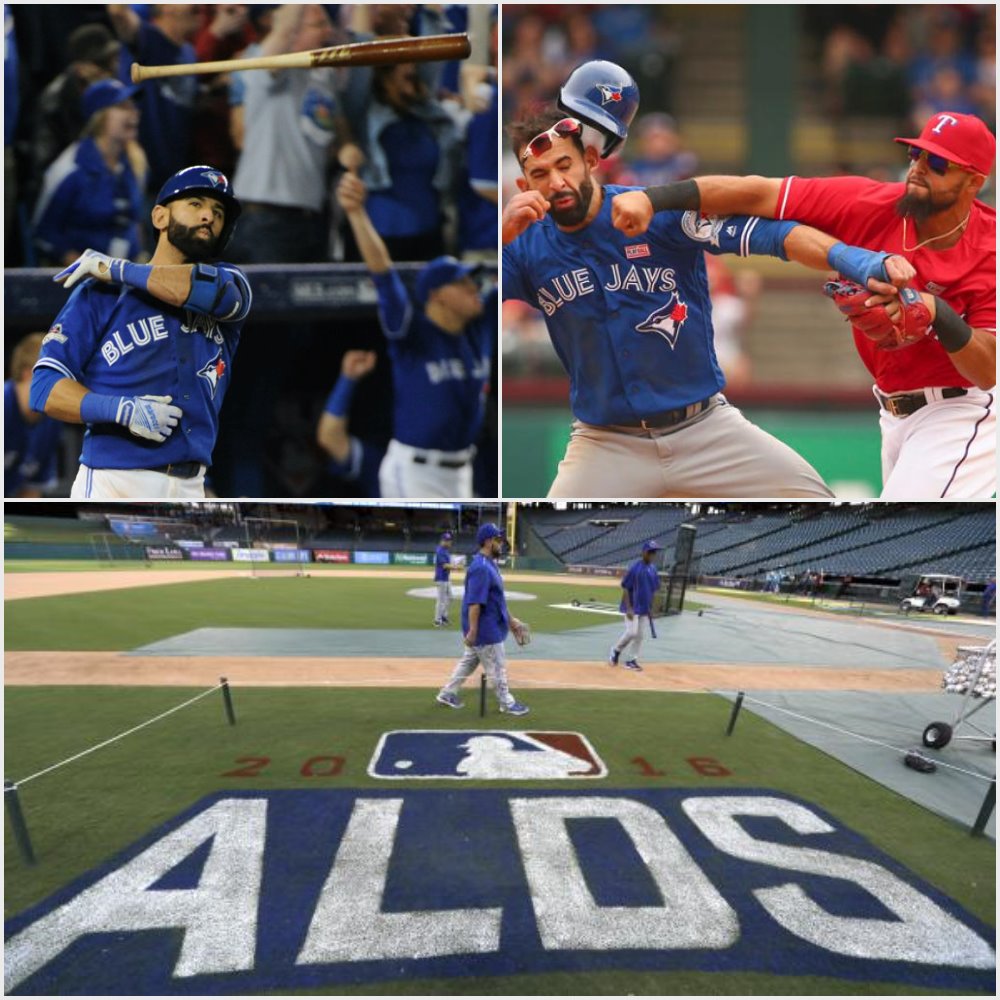 Just in case you weren’t sick of seeing this yet Jays fans, figured I’d put the video up here.  This team may have gone 22 years between postseason appearances, but in the last four years they’ve been in the dance they haven’t shorted their fans on memorable moments!  Alomar against the A’s, Sprague’s pinch hit home run, Devon White’s catch, Winfield’s two run double, the game four comeback against the Phillies, Joe Carter, Bautista’s bat flip (not a flip), Estrada’s masterpiece against the Royals, and now the Encarnacion bomb to win the wildcard game.

So it’s on to Arlington.  This is the tilt everyone wanted to see since May.  I remember saying to buddies after the Odur punch was thrown “how SICK would it be if these two meet in the playoffs?!”  I doubt we see anything crazy, but the intensity is going to be off the charts for this one.

The Rangers have a very good team, but what’ll be interesting in this series is now the recent history of the two clubs.  Record wise, the Rangers SHOULD take this series.  However, not to be a Jays homer, but I think the Jays are all kinds of wrong for the Rangers.

The Rangers since 2010 have built up quite a reputation of choking in big spots.  People forget, they were the World Series favourites in 2010 yet they lost in five to the Giants.  2011 of course they choked away game 6 of the World Series a couple of times to the Cardinals.  2012 they blew the division to the A’s and then the wildcard game to the Orioles.  2013 they lost a one game playoff at home to the Rays.  And then of course last season they had a 2-0 lead heading home against these Jays and we all know what happened there.

MEANWHILE the Jays went 4-1 in elimination games last year, and are essentially on a three game winning streak in elimination games right now.  The way it worked out over the weekend they didn’t actually NEED to win the last two games against Boston.  But the O’s were playing the Yankees and the Tigers had the Braves, so the Jays definitely would have felt like those were must wins.  And I thought the body language last night was much better.  Everyone looked real comfortable in big spots.

But it would be dumb of me to base liking the Jays off that alone.  And I’ve done some dumb things.  Heck, just Tuesday night I was at the Jays game sitting out in left field when I finally made up my mind in the 7th inning that I was done drinking alcohol and really wanted to declare I was done with it and make a statement so to speak.  OOPS!!!

Back to the task at hand…I love the pitching matchups for the Jays in this series.  Cole Hammels isn’t going to scare the Jays.  They didn’t dominate lefties this season like they did last, but no doubt they prefer them.  Meanwhile, Estrada proved how great he is when the pressure is on last season, and he seems to be hitting his stride just at the right time.  Over his last three starts Estrada has gone 19 innings, allowing just two earned runs.  So that feels like a bit of an advantage for the Jays.

Game two I feel like J.A. Happ will need to be great, because Yu Darvish is a matchup nightmare for the Jays, and he much like Estrada looks to be peaking at the right time.  8-2 since August 7th, and in his final two starts he went 13 innings allowing only 1 earned run and striking out 21.  He is ALL KINDS OF WRONG for this Jays lineup!  If I were Jeff Bannister, he’d have been my game 1 starter and this feels like it could be a decision that really hurts the Rangers.

Game three the Jays are rolling out Aaron Sanchez, I’m guessing vs Colby Lewis who does have a good playoff track record, but that is still a big pitching advantage for the Jays.  Game four it’s Marcus Stroman, and I have to believe that it would be Cole Hammels on three days rest, but it shouldn’t have been Derek Holland in game four last year yet Bannister went with him.  So should he make this mistake again I have to guess he would go with Martin Perez, unless he’s facing elimination and then maybe his mindset changes.  Man, wouldn’t it be nice to have the option of a power right hander to give the ball to in that game rather than letting the Jays see another lefty….

So the Jays in my mind have a big advantage with the starters unless the Rangers roll with a 3 man rotation, then it’s a lot more even.  The x factor in the series could be if Roberto Osuna is healthy (and as of writing this we still don’t know).  I said it on Monday, I’ll say it again: The bullpen is massively improved having Liriano coming out of it.  It was good with Benoit, it’s even better with Liriano in that spot.  With a healthy Osuna, I definitely prefer the Jays bullpen to the Rangers.

Finally you have the lineups.  No doubt the Rangers have the better lineup right now.  I really feel it’s a lot like the Royals lineup was last season.  Not to say they don’t have power (five guys with 20 or more home runs), but 1-9 there is essentially no let up.  They’ve plugged the holes that were there last October.  And the addition of Carlos Beltran is scary.  That guy is in the twilight of his career, but he’s still as clutch as any hitter in the game.

The Jays lineup hasn’t been itself for almost two months now.  I’ve bitched about it lots and will one more time, they’re too caught up in trying to play hero ball instead of showing patience and keep the line moving.  If they’re on, they’re just as potent as the Rangers.  But there is no reason to believe they’ll be on.  Tuesday night they didn’t change anything and were constantly getting themselves out, specifically grounding into double plays far too often in big spots.  Let’s be honest.  If it wasn’t for an awful managerial decision by Buck Showalter to go with Jimenez over Britton, the Jays could easily be done right now.

But I will say this, and it’s just a hunch.  But I think we’ll see this lineup start producing a bit more now.  The pressure is off.  They aren’t expected to win this series and are riding a pretty massive high.  This is another reason why I hate the Rangers going with Hammels today.  Well, I don’t like it for the Rangers…

I’m definitely starting to sound like a guy who is hoping on an off the bandwagon.  Not my intention, but would not blame anyone for viewing it that way!  Three weeks ago I wrote them off.  10 days ago I felt like they had righted the ship.  Going into Boston I had no faith.  After Boston I had a bit of hope.  Now I’m calling for them to knock off Texas.  Maybe I’m the jinx?!  If that’s the case, go Rangers!…