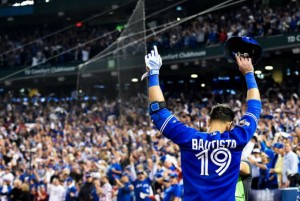 So, Jose Bautista spouted off…doubt you heard anything about that yesterday.

I completely understand his side of this story.  He hasn’t been paid what he’s been worth through this entire contract.  The Jays took a chance on him that his 2010 season wasn’t a fluke and the organization has been greatly rewarded for doing that.  He’s been worthy of 22 million a year and he’s only been making 14 million a year this entire time.  So he feels as if the organization owes him something.  But they don’t.  And to this point, I’m not a Mark Shapiro or a Ross Atkins fan.  But this isn’t their fault that Bautista didn’t bet on himself in 2011, it’s his.

And that’s what this boils down to for him.  He thinks “they owe me”.  They don’t owe him shit.  You didn’t bet on yourself in 2011, deal with it, or walk to a team that will give you that.

I also find it laughable that he grandstands the way he did.  “It’s not a negotiation”  Really?  Then why are you negotiating in the press?  I’m sure it was just a coincidence too that he wore a t-shirt that said “Home is Toronto”.  I’m sure that just happens to be his typical first day in Dunedin apparel.

If you aren’t a moron, it’s pretty clear what he’s trying to do here.  He’s looking to hold the organization hostage.  He thinks if he looks like the victim here that the fans, who already don’t like the new regime, will help force the organization’s hand here and they’ll cave to Bautista’s demands.

If I was running the team, this would piss me off and I would call his bluff.  I wouldn’t accept his terms which sound like it’s in the neighbourhood of 20×5.  No thanks.  You’re 36 when that starts, this ball club as good as it was last season has holes all over, not a chance.  If he wants to talk about a 2 or 3 year deal, I would listen.  Not 5, unless he only wants 10-15 million a year, which he doesn’t.

The downside for the organization is that if they are in the hunt come the trade deadline, they aren’t going to be able to trade him unless Bautista is so frustrated with the lack of a deal that he ok’s a trade.  Because the Jays can’t trade him without his permission, he has 10 and 5 rights (10 years in MLB, 5 with the same team for those who don’t know what that is).  I don’t think you can worry about that if you’re the Jays.  They can still qualify him next offseason and ensure they still get a 1st round pick for him, so it isn’t as if they would lose him for nothing.  If the season is a write off by the deadline and they don’t plan on doing a deal, you would think he would agree to move on.

Most importantly in all of this, is this guy just put himself ahead of the team by taking this all public.  No team in any sport needs a distraction, and he just became one.  And it amazes me that the initial reaction from some of the stuff coming out of Toronto that I heard and read, none of it was taking Bautista to task for this.  Of course for them, they’re tickled pink about a story to tell, so they love him for making their jobs easier.  You know how the media is objective and all…

But don’t be fooled by any of this.  Bautista knows EXACTLY what he’s doing here, and while it’s easy for me to say no to that from my living room without any negative fan and media backlash, Mark Shaprio doesn’t strike me as a guy who cares much about that either.  You can’t as a GM (or in his case a president) in any sport.  You have to do what’s best for your team, not what the fans and media want.  What’s best for a team that has a budget (a very large budget, but still a budget) isn’t paying what will highly likely be a declining player 20+ million a year.

Now, maybe Bautista is still mashing at 40 and this is a huge mistake.  It’s possible.  But it’s not probable.  Move on.  Short term pain for long term gain.  This lineup will still be high end without him, and that money can be used to really bolster both the staff and the bullpen.  None of the reasons for keeping this guy have anything to do with actual baseball.  It’s all “fan backlash, media backlash, etc.”  If he doesn’t want to negotiate and puts himself ahead of the team like he did yesterday, let him walk.