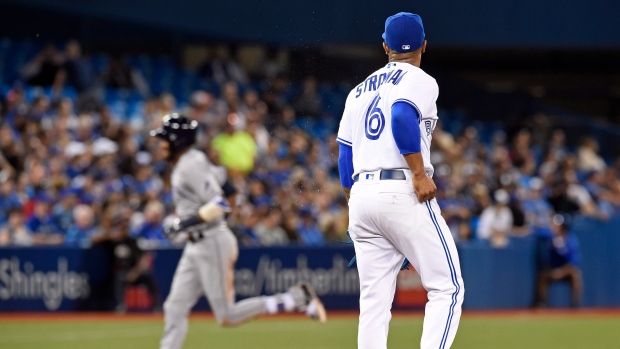 Why can’t people figure out how to use a four way stop?  Every freaking day I pull up to a four way stop and every day…LITERALLY EVERY DAY some schmuck is sitting there looking at me.  He or she pulled up to that sign well before I did, yet there they are, starring at me, wondering why I’m not going.  Like, I don’t want to see people get shot, but in that moment a part of me wouldn’t mind seeing these people get shot, or at least shot at.  If they do get shot, not to kill, that would be too far.  But maybe in the leg, or shoulder?  You know, just a heads up for them that says “hey, schmuck…learn to drive.  Mmm k?”

I have to shout out to my buddy Chris Roberts for calling this before anyone else.  Back in late August he tweeted that he thought they were falling off and would down the stretch, and I mocked him.  Idiot!  He was spot on in this assessment, and I was a moron!  But I’m more worried about getting it right than being right.

“Yeah, the division is a lost cause”.  Nope.  “Well they’ll still get a wildcard spot”.  Nope.  They’re done.  Sabermetric guys would tell me I’m a moron, and there is no doubt this team is still going to make the playoffs.  “It’s baseball!  It ebs and flows like this all the time, they’re just in a slump.”  No, they’re done.  I’m not meaning to be a downer for anyone, it’s just the fact of the matter.

For starters, this offence has been trending down all season.  It’s gradually gotten worse and worse.  And yes, the lineup is very flawed.  1-9 this team has a lot of the same guy.  Don’t have a true leadoff hitter which is like a closer.  Any analytics guy will tell you needing a closer or a leadoff hitter is a myth, but both spots are mental.  We saw it last season with Troy Tulowitzki.  He just was never comfortable in that role, where Ben Revere was.  But more than that, they don’t have enough contact guys, and they don’t have enough lefty/righty balance.

Add to that, the pitching staff has comeback to earth.  Marco Estrada has to be spot on with his stuff, and when he’s not he’s getting shelled.  Well lately he hasn’t been spot on and has gotten rocked a lot!  Happ has been coming back to earth a bit of late, neither one of Dickey or Liriano can really be trusted (even though Liriano was solid last time out), Sanchez now has blister problems and hasn’t been the same of late either, and Stroman is fine but despite what some think of him, he’s just simply not an ace.  He has ace type makeup, but at his best he’s only a number 2 or 3 guy in a rotation.  An ace can completely shut a lineup down.  At his best Stroman is allowing 2 or 3 runs.  Not a knock on the kid, I’m a massive fan of his!  But if he’s your top pitcher it’s not great news for your staff.

That’s not just limited to the starting staff either.  Joe Biagini is now getting hit.  Jason Grilli is coming back to earth.  Joaquin Benoit isn’t lockdown like he was for his first month.  Scott Feldman just simply sucks.  And Brett Cecil is just now a lefty specialist anymore.

Look at the celebration from the team on Monday night after the 3-2 win against Tampa.  They celebrated as hard over that win as they did after the last win against the Yankees last season which essentially clinched the AL East crown.  A 3-2 win against the lowly Tampa Bay Rays.  When you celebrate like that, it’s as if you didn’t REALLY believe you could win.

I remember thinking that same thing during a Yankees/Jays game last year.  August 14th of last year, the Yankees came into the game against the Jays, at Rogers Centre with just a 0.5 game lead in the division and the Jays were coming on real strong.  Carlos Beltran hit a 3 run bomb in the top of the 8th to give the Yanks a 4-3 lead, and the vibe you got from the Yanks dugout was somewhat of shock.  When I win betting football, I’m a hell of a lot more excited about that than I am when I get a paycheck.  Point is, if the Jays had any confidence right now it wouldn’t have been much of a celebration at all about a 3-2 win vs Tampa.  Instead, it was party time.  Not a good sign.

It sucks to say after such a great season, but it happens.  The Jays aren’t even the biggest collapse this baseball season.  The Giants, the three time World Series champion San Francisco Giants are in a total free fall as well right now.  And I don’t think this will be it for this group of the Jays.  They’ll be retooled this offseason, but I believe they’ll still be a favourite in the AL East, at least until the Yankees are fully rebuilt.

The fan in me desperately hopes I’m wrong, but the realist in me knows they’re done.